It Rolls for Ivan 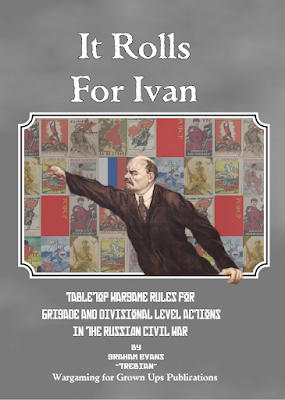 "It Rolls for Ivan" is a set of table top wargame rules for fighting Brigade-Divisional level actions in the Russian Civil War. The rules are based upon the "For Whom The Dice Rolls" Spanish Civil War rules. They are designed to enable games covering a large area, with sweeping cavalry movements and dogged infantry. Detailed sections cover the uniqueness of the war, from the reluctance sometimes of armies to obey their orders, to Armoured Trains and the various odd looking armoured vehicles employed.

Army Sizes and Figures
The rules were written for 15mm figures, based on 30mm x 30mm bases, but anything similar will do. A standard infantry battalion consists of about 4 companies of 2 bases and a command base, normally including an MG platoon. Each unit is about 18 small arms figures, 1 MG and crew and a couple of command figures. 2-4 battalions make up a brigade or regiment,  which may have further assets, such as mortars or an MG company. Brigades may be accompanied by artillery batteries of one or two bases of field guns or howitzers. Occasionally an armoured car or tank section of one model may make an appearance. Armoured trains may also be deployed. Aircraft and heavy artillery are handled by an off table mechanism, so it isn't necessary to have the models (although the author does).

A typical table top force for each army will therefore consist of  6-8 infantry battalions, plus an artillery battery and maybe an armour car.

Troop Classifications
Troops are classified by their level of training and their commitment to the cause. They can be one of Inexperienced, Competent or Experienced and also Indifferent, Committed and Fanatical. The combination of the two classifications gives a "Will To Combat" rating, that summarises the unit's morale state at the start of the battle. This enables differentiation between barely trained and uninterested conscripts, up to the elite White Officer battalions and also allows for the well trained and equipped forces of the Western Powers.

Style of Play
The system is an integrated IGO-UGO. Within each turn players activate units and perform a range of actions with them in any sequence they want, - firing before movement, or vice versa, reorganising to manage casualties or order a close assault. Players are limited to a maximum number of actions per unit per turn, and each "impulse" of action requires the playing of conventional playing cards of the correct suit, up to a maximum allowable by the efficiency of the army's command structure. This may be only 3 for an early war Red Army, up to 6 for a highly experienced force from the Volunteer Army.

Even then, it isn't that simple. When playing some suits units are required to make a NYEY/DA! test which will bring the impulse to a complete halt - unless the player decides to Coerce the unit into action (and if Cheka are present, may have no choice in the matter). Coerce a unit once or twice and everything is probably fine...anymore and it might decide it really doesn't like being pushed around.

Airstrikes, heavy artillery, reserves and rear echelon sabotage turn up when a joker is played, although exactly what you get and how much is randomised to some extent.

Combat Systems - Firing
Each small arms base rolls a number of dice depending upon the range, and this number is modified by factors relating to formation, cover and so on in a non-linear relationship. Hits are caused by rolling 6 or more, but the type of dice varies based on the training quality of the troops, with the worst rolling d6s and the best d10s.

Artillery bombardments work in a different way. Targets have the amount of fire at them recorded, but the outcome isn't known until the unit is activated or attacked. You may think you've shelled those Red Guards into submission, but you won't know until you charge home. Plus, unlike "For Whom The Dice Rolls", many units won't just sit there hugging the ground until the firing stops.

Combat Systems - Close Assault
The Close Assault system is similar in operation to other WGFGU rules, in that each round is a simple dice roll and calculation that always gives a clear outcome, with one side or the other forced to retreat with the losing side taking the greater casualties. Defenders in cover are forced back from position to position, and attackers have to weigh carefully the decision whether to press on, or consolidate on the position they have won.

This is an area of major difference to FWTDR as it has been adjusted to allow for cavalry combat to happen on a regular basis, so that Mamontov's Cossacks and Budyonny's Konarmy can take each other on.

Morale
Morale is embedded into the Close Assault and firing systems, together with specific "Terror Tests" if confronted with "modern" weapons like tanks or aircraft. Use is also made of what are known as "It Tolls For Thee" tests, which see whether or not a unit is broken due to the damage it has taken. Players must husband their troops carefully, making sure they reorganise and clear casualties on a regular basis to ensure units do not become overwhelmed with disorder and cease to function.

QRS
The rule book has the normal WGFGU QRS on the back cover, but due to the complexity of the Russian Civil War there's a second page at the end of the rules as well, plus one for all of the different armoured vehicles that made an appearance. These should be all you need to play the game once you've had a read through of the rules.

Troop Organisations and Orbats
The rule book concludes with information to help you organise your figures, with examples from many of the major forces involved, including

Specific higher level organisation charts are given for:

Resources Pack
The rules are supported by a downloadable resources pack. This includes markers suitable for recording unit statuses, as well as the potential hits from artillery and bombardment markers so you can keep track of who is firing at what. It also includes record and configuration cards for armoured vehicles and armoured trains.

The rules are available in soft back and hard back from Amazon, and as a pdf from Wargame Vault.