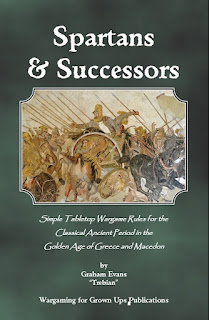 "Spartans and Successors" is a set of simple table top wargame rules for refighting the key battles of the Golden Age of Greece and Macedon on a small table, using limited numbers of figures. The rules were originally written to refight the Battle of Raphia, under the name of "Rapid Raphia". The intention was to produce a set of original and distinct "DBA" set of rules, using a squared grid and playing cards, with no dice at all.
This publication includes 12 historical scenarios to go with the rules.

Army Sizes and Playing Area
The rules use a 10 x 7 square grid, although players could easily use them with hexes, or on a larger or smaller grid if desired. The armies typically consist of 12 units, which can be single or multiple elements, depending upon the size of squares used. As a guide use of 3" squares with 60mm frontage bases works well. Troops are differentiated by simple Heavy/Medium/Light categories, and the rules cater for infantry, cavalry, chariots and elephants.

Style of Play
Play alternates between players during each move, each player taking it in turns to issue command cards, shoot, move and melee with units. Each player uses a standard deck of playing cards. Units are allocated cards which are used for all actions, whether shooting, moving or firing. Units without cards are automatically eliminated, otherwise they are destroyed if pushed back into immovable obstructions  or outscored by an opponent playing more court cards. Determining who goes first is decided by who wins the initiative, which is bid for from the cards in hand. Winning and going first brings considerable advantages, but only at the cost of possibly revealing your plans to your opponent before they move.

Management of the cards as a resource is key to victory. Each player's deck can only be used a finite number of times, and the number of cards used in a turn are restricted. Units with an advantage, or led by a General, are allowed to add extra cards during combat, whilst units attacked in the flank or rear lose cards.

When moving and in combat different troop types use different cards, and gain benefits from other units if correctly deployed. For example Pike armed units increase the value of cards played in combat if they remain stationary, and may add extra cards from supporting units. This makes them very tough to the front, but extremely vulnerable to flank attacks.

QRS
The rules include a QRS on the back cover, for ease of reference.

Scenarios
The following scenarios are included:

Availability
The rules are available from Amazon, or as a pdf download from Wargame Vault