Land of the Giants

Actually, that isn't true. I'm sort of a bloke who has a bit of a temper and a tendency to go off on one. However, my employer has paid for me to go on self awareness training so at least I'm aware that I'm not an easy going chap and can recognise in myself when I'm going to lose it and so can control any outbursts and so on.

However sometimes you see something and it just sort of tips you over the edge a bit. Apparently, according to Nicholas Holmes in "Arquebusier" magazine "28mm is now well 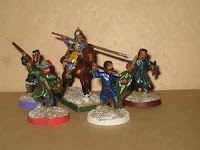 established as the scale of choice for most wargamers".

Since when? Now I have armies in most scales from 6mm up to 25mm, but my 28mm collection is limited to stuff I've won at Society of Ancients events and is only fit for skirmish gaming (pictures of these, which I think are Gripping Beast illustrate this blog). And when I start a new period my thoughts do not immediately turn to 28mm. Mostly I turn to 15mm (especially if Peter Pig has a range) or 20mm plastics from Hat & Zvezda. These win on speed of painting, transportability and realism in that you can field lots of units with reasonable numbers of figures in them.

I accept I'm not like a lot of wargamers, but do "most wargamers" now gravitate towards 28mm figures? I sincerely hope not. 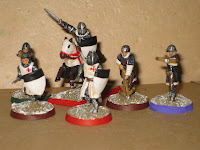 Secondly there's the painting style we're all obliged to adopt now, with the multiple layers and tones are then the specially graded cans of overpriced varnish (honestly, - go and buy some Ronseal). They make figures look as genuine as David Dickinson's suntan.

Thirdly there's the look of them. I did a quick check on Wikipedia but I can confirm that anabolic steroids were introduced in the late 1930's (allegedly the Nazi's tried to use them to produce an Aryan super race), consequently the stocky, over muscled figures many manufacturers produce can't be justified in any way. People simply do not look like that*. Have a look at Warlord Games stuff, in particular the ECW figures. They're well built, fit looking, carrying the sort of bulk that sad sim-world players put on their avatars. And the faces! Only Noel Fielding of the Mighty Boosh comes close to looking like many of these figures which appear to have hada face transplant from a flat iron. Then check out the length of the arms (which would barely reach pockets), and whether or not they have a neck.

I could go on, - there's the complete disregard for scale in the clothing they wear, which features jackets the thickness of a plank. There's the idea that flags are likewise made out of a peculiar type of cloth that is 2" thick.

Still, I'm a lone voice in the wilderness on this one apparently and as the hobby is a broad and hopefully tolerant one we can all live side by side.

However I take exception to the expression of opinion as fact, and the underlying assumption that bigger is better.


*Ironically to my mind the best proportioned 28mm figures I've ever seen were Harlequin's original series Dr Who figures. Lovely proportions and body shape.
Posted by Trebian at 14:04