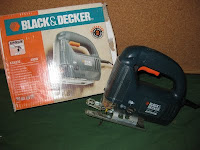 Let me introduce you to one of the best things I ever bought. I didn't realise it at the time, but my Black and Decker electric jigsaw is just brilliant. It has made the production of robust terrain pieces quick & simple and meant I could make purpose built wargame shelving as well. You can get one for c£30 if you look around, and worth every penny. Plus it comes off the household not the wargaming budget.

We'll leave the shelving to one side for the moment, and concentrate on the making of terrain pieces.

I'm usually okay with the concept of spending money on wargaming peripherals such as rules, books and terrain bits and pieces. After all I'm a Grown Up with Grown Up income and restricted time. I'm prepared to throw money at a wargaming problem if it'll get me to the answer I want quickly enough.

And then...I'm not prepared to be ripped off for bits of road that are going to fall apart or look tatty inside a couple of months. I want stuff I can chuck in boxes and lug about round the country without having to worry about it. I look at what's on sale and have a Top Gear moment ("How Hard Can It Be?"). Plus I know I'll have to repaint anything I buy so it matches my figures and wargames table any way (see "Painting Toy Soldiers (4)" elsewhere on this blog).

I'm helped in the production of terrain by the upgrading of furniture that has taken place over my aduly life. We started off with some really cheap MFI wardrobes and chests of drawers and have moved up to professionally fitted stuff. Rather than dump the old furniture I disassembled it and stored it in the garage against some future, ill-defined usage (try to explain this to most women, - they can't understand why it's important to keep odd bits of wood. You just never know). 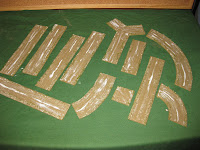 So when I decided I wanted long stretches of road to put across the rolling savannah of my fictional African country I started by hunting in the garage. I had a load of hardboard off the back of a wardrobe. I cut this into strips about 50mm wide (to accommodate the 40mm frontage of most of my vehicles) and the length of the hardboard panel width (c200mm). I then ran polyfilla humps down the side of the road and shook sand over that. Once this was dry I painted them with my standard Dulux brown, and added an off-white drybrush. 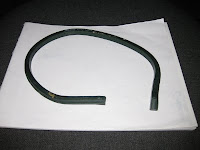 To get 4 metres or more of road took me no more than three hours. The curves took a bit longer, - I had to drawn them with a pair of compasses and a graph flexi-curve (see picture if you've forgotten what one of these is). 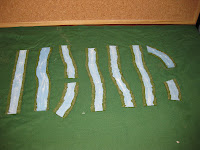 The production of small rivers is straight forward as well, using the same technique. However, I did make slight changes. My first river strips were dead straight, and look like canals (see piece on extreme left). I then twigged that as long as the start and end of the river sections are matched up you can make little bends in between to make it look more realistic and still have a straight river. The flexi-curve really worked over time for this lot. 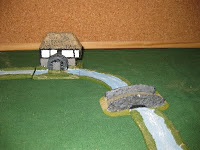 Just to show off here's a picture of my Hovels watermill, which I put on a base to get it to the same height and added matching river banks. The size and width of the river was determined by the fact I own a couple of Peter Pig resin bridges that used to be in his fantasy range. Don't be put off by the fantasy tag, - they're nice little pieces.

Finally, I suppose you all want to know what I did with the doors off the wardrobes.

Well, I made ridge hills for my desert games. The jigsaw enables you to draw randomly wiggly lines on the sheets of chipboard and cut through them easily. Depending on your patience you can either glue them together with PVA glue, or just screw them together with some wood chip screws (remember to countersink the holes). I then paint with a layer of polytex ceiling paint to give them some texture, before I finish off with the Dulux and a bit of dry brushing. I use polytex because it's easier than mixing sand & PVA glue, and (again) it comess off the household budget. 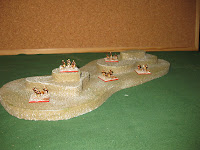 Moral: It isn't that hard to do, nor that long, if you have the tools and the space to do it. That's what's great about being a Grown Up.
Posted by Trebian at 11:42