So, initial posting on the blog about painting toy soldiers.

First, some ground rules. This painting system is designed to enable me to produce completed armies in a reasonable period of time. It takes account of a number of restrictions, - I usually only get a maximum of 1 hour an evening, four nights a week, with the occasional couple of hours at the weekend (depending on what other domestic DIY/gardening/domestic tasks need to be done). My aim is to finish a unit completely from cleaning to basing in a week. Furthermore my eyesight isn’t terrific (even with glasses), and like many people of my age the back and fingers are starting to seize up.

Final caveat, - this method works for 15mm & 20mm plastics, which is good because that’s what I paint most. If I ever paint 25mm (or even “shudder” 28mm steroid pumped monstrosities) then I paint them in a slightly different way, - which is mostly driven by the sheer weight or bulk of the figure.

First up, sort out your figures. I paint by units, not individual figures. This ensures all the figures in the unit are consistent. I sort my figures into units when I get then and put them into zip lock bags. The tidying up and any gluing is done in the lids of those cardboard press together CD boxes (I use the boxes for storing A5 magazines). I have three of these so I can have 3 units on the go at once. You’ll see the lids as background in some of the pictures. 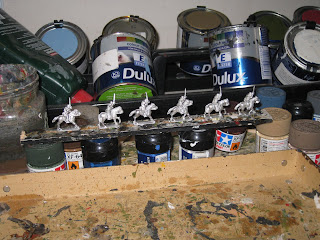 Once the figures are cleaned up and stuck on their horses or whatever I glue the figures on to sticks, using a hot melt glue gun. The sticks I use were slats from a chocolate liqueur box (!) and other bits of wood slat that I’ve picked up. I have about a dozen of these ranging in length from 12” to 4”. The 12” slats will take 12 cavalry or 24 infantry.

The stick in the picture has 6 Peter Pig Royalist Cavalry on it. There's only six because I've broken one of my golden rules - I've changed my unit sizes and I'm painting filler figures and trying to make them match.

Because I’m using hot melt I can start to work on the figures immediately. Stage 1 of the actual painting is to undercoat. At this stage half of you will leave me as I undercoat in black.

White gives nicer colours but if you miss a bit you can see it really obviously and I only notice once the figures are varnished and based.Not only do I undercoat in black, I undercoat with a brush. I also under coat using black emulsion paint.

What?? I hear you say. Well, says I, the cost of black spray paint is prohibitive and the smell of the solvent is disgusting and I can’t be bothered to take stuff backwards and forwards into the garage. Plus it starts to get cold and wet this time of year. 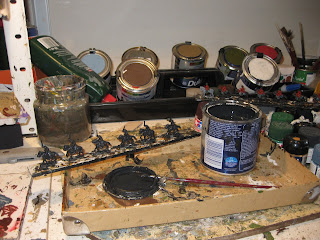 I use Dulux undercoat because it costs me £2.99 for 250ml. On top of that when I did spray black I ended up painting in the bits I'd missed anyway.Actually there is one downside to undercoating with a brush. If you glue your figures with superglue make sure it has dried properly, especially round the saddle area, otherwise the brush hairs will get glued up and matted. I could leave the stuff overnight to be sure, but that would cut into my painting schedule.

I do about three sticks in an evening. Once they're done, I put them to one side to dry, ready for the following day's painting.

That'll do for now, as I don't want to trespass on most people attention span.
Posted by Trebian at 08:42