Why I love Wargaming

There I am, just packing up work on a Friday evening and someone says "Treb, I think we have a problem....". Sure enough we have a problem. But it's gone 5pm, so there's nothing we can do to fix it. All I can do is tell the relevant people to expect some problems next week, then go home. Not a brilliant end to a not brilliant week (note lack of postings....can't even blog about not painting, let alone paint).

Any how, get home and have dinner - pizza & the latest couple of episodes of Scrubs - then layout the table for this evening's game. Due to illness with one of our members we have a last minute change of venue to my dining room. This is great as it means I don't have to rush round 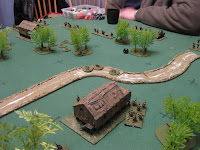 to get stuff ready to go out. However, it does mean I have to rush round to set the table up.

We have a yahoo group to discuss what we're going to play (It's called the Monday Night Group, even tho' we meet on a Friday), and so we've decided we're going to play RFCM's PBI. As I get to set up and chose the toys I have proposed a bit of Burma, - XIVth Army v Japanese.

I struggle a bit with the set up as I don't actually own a copy of PBI (I bought the earlier version and haven't upgraded). Plus my dining room table table isn't 4' x 4', the standard size for PBI. You may have guessed by now that we don't always play games "straight". We have a number of house rules for PBI. The one that really moves the game along is that we roll the Motivation and AP dice together, and get to chose which dice we use for which. We get fewer failed motivations, and more usable APs. It reduces the game's "FQ" considerably*.

Anyway, I set up light jungle with a dried up river bed running through it and a couple of huts. The huts are Peter Pig, the trees are that fish tank matting you get in per super stores, cut up into sections and glued on drink mats. The river bed/road started life as the back of an old MFI wardrobe now cut up into sections (advantage of being a Grown Up, - you get to cut up furniture with a power saw. I'll do a post on terrain building at some point). 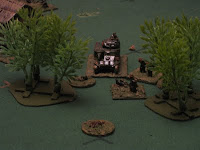 I then put out a couple of platoons on each side, the Brits (actually Africans) got a couple of Grants as well (Rajputs). The Japs got a couple of infantry guns. Figures are all Peter Pig, the tanks are Old Glory, because Mr Pig doesn't make Grants (I won't ask him to make any now as I've got some).

Out of our group of about 6 we had a turn out of 3, including me. Which was good as the other two had the rules.

We played for about 2 hours, and didn't completely finish. My Japanese had taken a bit of a pounding, but had put in a couple of spectacular bayonet charges. And I seriously duffed up on of the Grants. The XIVth were probably closing in for the kill, as one of my infantry guns had gone poof! and I was running out of anti-tank equipment.

Anyway, that's not the point of the post. The point is I sat down for an evening with two good friends, had a couple of cups of coffee/tea discussed life, the universe & everything and had a pleasant game. No edginess, no win-at-all cost tactics, no shouting across a noisy room. Just a really nice evening. Wargaming can create that environment, - the game fills in when the conversation drops, we share opinions and views and discuss our mutual interests.

By the end of the evening I've completely unwound, the troubles of the day pretty much gone.

Then just as we're packing up and saying good bye my mobile goes off. It's my boss's boss. "Trebian, - what about this issue, - is it our fault and what have you done about it?"

Blast. Back to Real Life.


*FQ is "Frustration Quotient". It refers to the rules in a game that seem to be just designed to wind players up. In PBI you roll to motivate, then roll to see what you can do (Action Points, or "APs". This gives you the situation where you can roll a high number when you motivate (when you only needed a low number) and then a low number for APs which means even tho' you motivate a unit it still does nothing. I've played entire straight games where units resolutely refuse to do anything. It may be realistic, but it isn't always fun. Having said that, I do love the odd game of PBI .
Posted by Trebian at 09:25