The Advantages of Being a Wargamer (3)

One of the things I've loved about being a wargamer is the people you meet on the way. Even if you don't see someone for years, you sort of pick up just where you left off. The problem is that you often only bump into people at shows and do the "we really must catch up properly" thing, but then stuff gets in the way and you never do.

Anyhow, we needed to be Up North this weekend, so we decided to make the most of the opportunity. A quick e-mail to Pete Berry of Baccus miniatures and we agreed to meet up. Timing prevented a wargame (plus Christmas Shopping to do at Meadowhall), so we met up with him and his good lady wife, Helen. They booked us in to a very pleasant Italian Restaurant on the Eccleshall Road in Sheffield, where we spent an enjoyable evening catching up on all things wargaming and family related matters, with copious amounts of wine and some lovely food. Rounded off by stepping out of the restaurant, and getting a taxi immediately. Almost a perfect Wargaming for Grown Ups evening, (in that we had a lovely time and still no figures got painted).

I first me up with Pete when I went up to University. although he'd just graduated he still called into the University Wargames club. Pete has had an important influence on the way I wargame, his drive is always to do things properly to the best of your ability, and if you don't like something don't just moan about it. Do something. Write your own rules, set your own standards, and in Pete's case as well set up your own figure company as well. 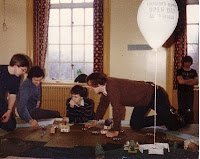 Whilst at Uni he was one of the prime movers in setting up large , multi-day refights of big Napoleonic battles at the club. In my first year the club put on Durrenstien, a massive battle fought in Austria between the Russians and the French which is mostly unknown. By pure chance some of the photos I took of the game all those years ago fell out of a file as I was tidying up a week or so ago.

For those of you who know him, you'll recognise a young Pete leaning against the wall in the background. The chap kneeling on the table in the brown jumper is now ProfessorDaniel Szechi, currently of Manchester University History Department, and one of our foremost experts on the Jacobite Rebellions. I notice on his biog on their website that he doesn't list wargaming as one of his hobbies. Shame on him.
Posted by Trebian at 16:35