It's been about a week since my last proper blog, - a week in which much was not achieved in so many spheres of life. 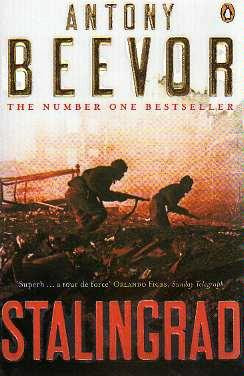 Having said that I did make some progress this week. I had to make a longish train journey on Tuesday and that gave me a chance to finish Antony Beevor's "Stalingrad". I've not read a lot about the Easter Front (despite having played in an Eastern Front campaign that stretched over about 10 years), and this has been on my list to read for over 5 years because everyone says it's good. And I quite enjoyed "Enemy at the Gate"

I picked up my copy from a second hand bookstall on a local market a month or so ago. It cost me a few pounds. Must say it was one of the best pound for pound buys I've made recently. It is a really well written book as a piece of history writing, not just as a resource for wargamers.

There are many lessons to learn from it (not just "Don't invade Russia without winter clothing") - for example the perils of working in an organisation where it is dangerous or near impossible to give bad news or disagree with the boss.

I still don't think I'll start to invest in Eastern Front armies, - for a start I've still got too much to do elsewhere. And one book doesn't count as research.

My last thought on this is that I'm not aware of anyone who makes a range of emaciated Germans, dressed in Russian cast-offs and rags. I've remarked elsewhere that if anyone makes Zombie SS/Wehrmacht figures they'd be ideal for the last phases of the battle.

Talking of last phases I'm virtually at the bottom of my bag of ECW figures to paint. I've got three sticks undercoated on the desk (see early post on painting toy soldiers if this means nothing to you). That's one infantry regiment and four guns and crews. After that I've got a couple of sticks of cavalry and a few officers. It may all be over by Christmas.

That leaves me in the "sweep up phase". That's when I look at what odds and ends I've got left and see if I need to buy a few more packets just to use them up and leave me with as few unused figures as possible. I also have a look at the gaps in my storage boxes to see if the odd extra regiment is needed to fill up the spaces. So, an order off to Peter Pig in a couple of days.

Then - what next? I've been considering putting together a Peter Pig Scots Covenanter Army, but if I do that I'll need to buy a New Model Army as well. Severely tempted by that, but I was thinking of looking at a different period. Quite like the idea of a 20mm plastic Alexandrian Period Indian Army.

Still, enough for now. Need to do some on-line Christmas shopping.
Posted by Trebian at 09:46