I was poking around in the chest of drawers I keep my scenery bits in (well some of them) this afternoon, and discovered a pile of white polystyrene crumbs. They'd been chewed off the "Tomb of the Phruti", the most sacred site in the whole of Zambola. It could start another Civil War when President Jog-Jog finds out. 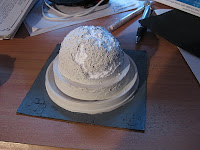 I thought at first that the tomb had just started to crumble through age and poor construction, but the little black mouse droppings amongst the polystyrene gave the little critters away. I'm not sure whether to paint over the damage or try to polyfilla it. If Eastern Zambola wasn't so arid I'd put glue over it and sprinkle flock over it to make it look overgrown. May be I can move it into my jungle temple box.

I suppose this is a consequence of storing so much of my stuff in the garage, but I don't really have a lot of choice. I got caught a few years ago when a load of old carpet underlay I used for WW1 shelled landscape got turned into a nest.

Anyhow, I've done a quick run through the rest of my stuff and seem to have got away with it otherwise. Most things are in sealed boxes & ice cream tubs which act as deterrent. I really don't want to get into setting traps. Not because I have a problem with killing the pests, it's just so messy if they don't get killed outright, or get decapitated.

Annoying news also arrived today on the basing front. I mount most of my figures on the Peter Pig pre-cut plastic bases. I like these as they are robust, inexpensive and don't warp out of shape. For larger models I use modellers' plywood, which I get from the local model shop. They have a thickness that is identical to the Peter Pig base, so I don't get height mismatches between figures. 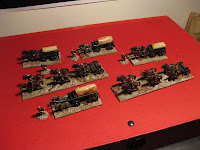 Over the last few days I've managed to get round to finishing off my Sudan campaign wagon train. We've played "Science v Pluck" over the past few years, and I think the players are ready to deal with a proper sized baggage train, - one that doesn't fit into a square comfortably. I've also got plans for a balloon section, so they can do some aerial reconnaissance. Hopefully over the summer, when I get the big table set up in the garage, we can play a series of linked games based round the Suakin expedition. The picture shows where I'm up to, - a couple of mule carts, some small horse wagons & a couple of limbers. I've got two more horse wagons, two more limbers and two large four horse wagons to go. Add to that half a dozen camels and a few pack mules and you have quite a collection.

So the remaining wagons and horses are painted and varnished, but when I come to base them up I'm out of plywood. No worries, I had to go into town this morning anyway, so I take a sample of wood with me and call into the model shop. Conversation goes like this:

Me "Can I have a sheet of this thickness ply, please?"

Me " Well, I really want this size. Can you check again?"

Shopkeeper: "Don't ever recall seeing anything like this before. Where did you get from?"

Me "I bought it from you earlier in the year."

I'll give him a couple of weeks to see what he can find. In the mean time I'm left with sanding down hardboard, which I fear may warp once glue, polyfilla'd and covered in sand.

If he can't get any, this could be serious.