Time to do my "What I got under the tree" post, I suppose. 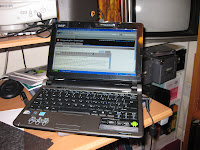 First off this blog is being typed up on my new Netbook. I have to say I'm impressed so far. It is rather odd to consider this is not supposed to be used as a laptop or a PC, but it has got 1GB of memory and 160GB hard drive. Ridiculous. Plus it can sit on your lap without cutting off the circulation and it allegedly has 6 hours of battery life. It also comes with a dual boot Andriod environment (?). Let me know if you know what that does.

All I have to do is chose a mobile broadband supplier, then I'll have something more interesting to do on the train on my frequent trips to London.

Any how, here's a picture of it showing this blog entry being written.

My final thought is that kit this powerful and cheap means that the computer moderated table top wargame is probably actually achievable if anyone really wanted to do it.

I also managed to pick up a few extra packets of Peter Pig ECW cavalry, just to round my forces off (I changed from a four base per "Regiment" structure for my horse to a three base structure during my game development, so my original purchase of figures left me some odd ones). Of course, I forgot to order any bases for them and I seem to have done the sums on what I needed wrong, so I shall be placing a follow up order as soon as the Piggie website opens in the New Year.

Finally a brief word on the Christmas cracker. Whilst we all tend to focus on the awfulness of the jokes, they sometimes provide 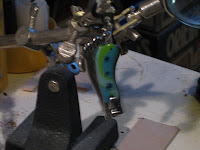 unexpected bounty. My 20mm Ancient Britons are fleshed out with the odd Christmas Cracker figure, and there are other plasticy bits in other armies too. An earlier blog has featured this year's surprises, - the Killer Wind up Christmas Puddings. However, I think the most useful thing I ever got out of a cracker is featured in the picture to the right. If you can't tell what they are, they're toenail clippers. Whilst I'd never put them anywhere near any part of my feet, they have proved terrific for clipping off odd pieces of metal from figures. You know those irritating bits where the figure won't lie flat so you can get a knife at it. They're really useful for clipping away that bit of metal between the base and raised hoof of so many galloping horses.

And if I don't blog again for a while, Happy New Year.
Posted by Trebian at 17:58