Some times Real Life gets in the way and it isn't a problem. Whilst preparations have been underway for a while (and I have noted a number of Christmas Dinners already) Christmas has sort of kicked off properly. Last Friday evening we had a short and jolly ECW knockabout game (massive Royalist win due to their cavalry exploiting a poor Parliamentarian deployment) and rounded it off with some Ferrero Roche - won in a raffle - and some homemade mince pies.

Saturday was decorations and tree day which meant the traditional "Finding Out the Fairy Lights Don't Work" game, followed by the "Oooh! No One Makes Them Bulbs No More" event at the local hardware shop. Which leads to the "Soddit, I'm Buying LEDs - They Don't Have Bulbs" real-time simulation. 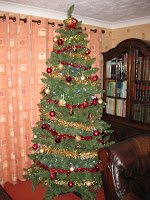 Putting up decorations always prompts me to look at the wargaming applications of the various bits of ephemera you acquire. So far I've got using Baubles for Hot Air Observation Balloons, but I'm not convinced they're big enough. Any other udeas, just leave a comment.

Sunday Morning's painting session has been disrupted by Christmas Card writing. This always leaves me resolving to arrange games with those people I haven't seen in the last year. Maybe this next year I'll actually do it.

Better get back to compiling Christmas Playlist for the MP3 player.

And planning how I'm going to fit in painting all that stuff I ordered for Christmas.
Posted by Trebian at 09:42