The Elephant in the Very Big Room 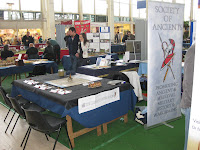 So, first formal outing of The Elephant in the Room. Milton Keynes' Campaign was chosen for the honour. As I've said before I like this show as it is really accessible to the non-wargaming public. I mean Derby is all very well, for example, but being on a university campus on the edge of town only those who are already in the hobby are ever going to visit it. With MK you get quite a few people who've never seen a wargame before and turn out to be prepared to give it a go, or people who used to and sort of gave it up but now that you mention it have got some Egyptians/Seleucids/etc in the attic it might be fun to get out again. After all the hobby is about people and you need to get new or newish blood back into it. 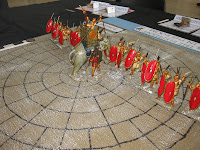 I've done MK for the last three years now. Last year and the year before I put on a large ancient traditional wargame with my 2omm Hat plastic figures. This year I thought was a little bit below par. There were fewer people about, - well it was a cold day today and we're in a recession, so I shouldn't be surprised. And the trade stands were fewer and sparser than in recent years. Again, the recession I fear. 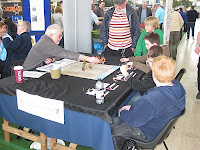 As it was we got in 9 runs of the game, with three people each time, using 2 velites each. We use some of the local club members to keep the numbers up, but that was about 18 players of varying ages and experience. I even got a break as one of our group took over and ran a session. 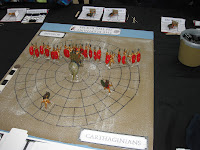 Overall the game favours the Romans, especially if you use all 6 velite figures. We had one Carthaginian win, but quite a few ran close. And that's what I want, - the players to win but feel it was because they played well, rather than got lucky.

So, a success. And I'm back tomorrow for another day. Maybe see you there?
Posted by Trebian at 19:28