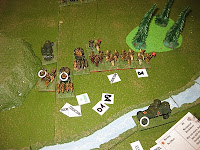 Well the playtest last night went down quite well. Didn't get as much played as I'd have liked. Too many toys and too many players for the time allowed. However most of the new bits got tested, even tho' we still haven't had a mutiny despite units overloading with Coercion markers.

You can see a devastated Red Cossack unit in the picture bravely pushing on ("Da!") whilst needing a bit of "help" from their Commissar from time to time.

The players have quite taken to the idea of forcing troops to do things if they seem reluctant, and the activation sequence is hanging together quite well. The firing mechanism is simple but is functioning, - basic roll to hit with a saving roll modified by a few obvious factors. I introduced a "Casualty Clearing" sequence which enables units to reorganise themselves and convert the hits caused by fire/melee to permanent casualties, - the equivalent of rounding up the stragglers and seeing who is actually dead so on. This again seemed to work quite well. As a base can be overloaded and eliminated by basic hits this means that a unit can be "blown away" but that if it survives the initial onslaught the commanders can sort them out and get them back into the fray (BTW stole this mechanism from Chris Kemp's "Not Quite Mechanised") 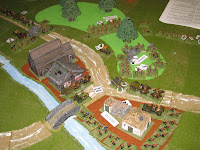 I've started to work on the morale rules. The first change is to enable a player to delay when a test is taken by applying a bit of pressure (Coercion markers again) so they can either do a reorganisation to give the unit a chance of passing the morale check or try a last ditch attack with them to get some benefit before they all head off for the home farm.

There are things in the rules and the games I'm still not sure about. I had overall commanders on the board but I don't know what they do yet (or even if they are needed) and the rules suddenly had this reference to Pinned and I'm not sure what that's for (or even why I put it there).
Posted by Trebian at 09:18