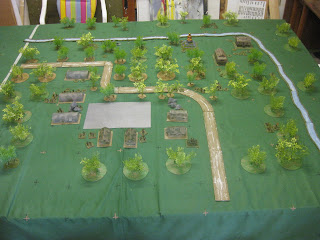 Last Friday we did the second, and I think final, round of the PBI jungle game.

Getting the Burma figures out after a long break makes you look at your set up and makes me ponder on what changes need to be made. During the week between the two games I've come to the conclusion that I need to add some 25pdrs to the XIVth Army box as they're pretty ubiquitous during the campaign. I've started to search around for suitable models, and also started the research on exactly what I should have. Not as simple as first thought as they didn't deploy the classic "Quad, Limber & Gun" much beloved from the early days of Airfix. A degree of conversion work will be needed to put on the jury-rigged jeep axles, and I'm not sure if they towed them with jeeps, or broke them down for non-towed transport. Or course, I could just cop out by only doing the guns deployed but I try not to be that shallow these days. The other concern is that this is a further chink in my painting regime discipline which says never buy new stuff until you painted the last army. Currently I've got 28mm Crusaders & 16th Century Irish to finish, along with Sudan Campaign Limbers, RCW Tchankas and an ECW Covenanter army, all in 15mm.

Anyway, back to the game. Through the arrival of a new player to last week the Japanese flanking manoeuvre turned up, - an extra platoon with HMG support. This rather pinned the XIVth's right flank units in place, so the remorseless Japanese pressure from the front carried on. 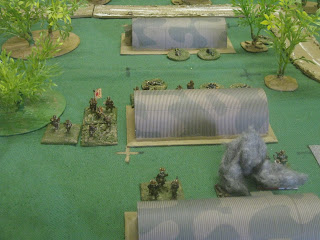 On the Japanese right the Japanese veteran platoon re-gathered its strength and pushed their opponents back into the Nissan hut complex. At the end of the game the West Africans were just hanging on, but were about to be assaulted at the first decent AP roll. 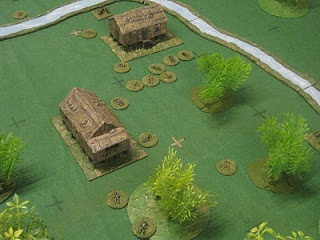 In the middle the Japanese medium mortar platoon managed to blast the remaining forward platoon out of the huts, leaving one sole group to hide out in the jungle, and fight its way back. It was a feature of this game that in spite of the crushingly high level of casualties sustained by pretty much everyone the worst morale result was normally the do not advance one. This was due to some fair dice rolling, but also because mostly people didn't hang around in squares with casualties and with one exception passed break tests.

Anyway the lonely stand soon became nick-named Errol, as he fought his way Errol Flynn-like back to the base perimeter.

On the Japanese left the new platoon surged forwards, helped by the thick cover and a couple of really good mortar stonks that wiped out the HMG section covering the flank. Bringing up the Stuart to hold the flank up worked, but it looked awfully vulnerable even though the only anti-tank weapons facing it were three HMGs. It doesn't have very thick armour, and offensively HE from tank guns isn't a PBI game winner.

The game ended with the Japanese poised all around the perimeter of the base, and the XIVth Army down to about 5 stands and one tank.

At which point as it was my game, in my garage and I was playing the XIVth Army, I declared night had fallen and the game was a draw.
Posted by Trebian at 09:16