One of my better Tuesdays

Tuesdays are a bit rubbish as days. They don't even have the decency to be half way through the week. However Tuesday this week went quite well.

On the non-wargaming front I had to do a presentation to our FD to explain to him what we've been up to for the last year and why we haven't wasted that money we spent on the project.

Ignoring the track record for this type of thing I set up a session that linked live system access to a Powerpoint presentation and piped it into a conference room over the wireless network.

There were so many points where this could have gone wrong and has indeed done so in the past. In fact it all went really well, everything worked and said senior man was duly impressed. He asked all the right questions (ie mostly those I'd prepared for) and liked all of the answers.

On getting home I got a call from Phil reminding me he'd got a mid-week wargames visitor and would I mind coming over to help teach him PBI. As I'm missing out this Friday for a number of really good Real Life reasons I got in the car and drove over. 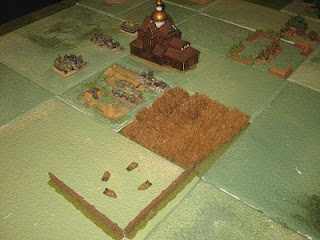 Phil had set up a simple table and invited the pair of us to attack his German veteran platoon with a couple of platoons of Russians.

I duly obliged with a succession of brilliant manoeuvres resulting in close assaults. Despite wrong footing the Germans at every turn It didn't go as well as it could have done, and I was left with a field consisting mostly of dead bodies.

Overall it was quite a tough call in game one as apart from their ability to close assault at the drop of a hat the Russians were quite lightly equipped to take on a platoon in close terrain supported by armour. In practice it was all over quite quickly, so we reset and had another go. 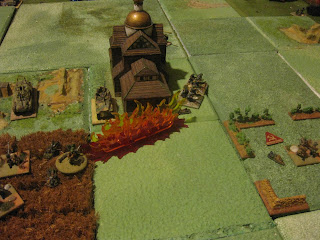 This time we got some extra support arms, - a few HMGs, an ATK Rifle and an infantry flamethrower. Plus some armour.

Inevitably the armour supporting my troops got next to nothing in APs on turn one, got trapped on the edge of the board and was duly knocked out by some neat German shooting.

However after years of trying I managed to get a flamethrower into a square adjacent to a defensive position, survive the Op Fire and actually get off a squirt that hit something!!!!

Phil has been saving a Litko plastic wall of flame for this for quite a while. I'm not a fan of Litko plastic markers. They make me feel the same way I do when I see really bad plastic flowers. It's sort of an insult to nature. However the wall of flame certainly looks the business in the picture.

Which brought us to the end of the game.

Lovely way to round off the evening.
Posted by Trebian at 19:15