A Night at the Ballet

Stay with me here. I've not gone all girly on you. This was one of the more surprising visits of the holiday in Russia.

As part of our "package" the tour company laid on a private "Gala Ballet Performance". For those of you who aren't familiar with the world of traditional ballet dancing this means you get to see a number of excerpts from well known (well known to some, - I was clueless) ballets performed in costume but without the chorus line or any scenery.

Whilst I'm not a fan of performance dance in pretty much all of its forms Mrs Trebian likes ballet and after all if you go to Russia you really should see what it is good at. Plus it builds up Brownie points for later if you want to go off and look at something on a bit more of the military side.
The venue for the performance was at a private club in St Petersburg (ooh err Mrs...dancing in a private club, nudge, nudge wink, wink).

Sorry. Lost my train of thought there for a moment. Where was I? 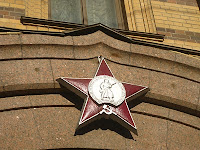 b in St P. I didn't pay much attention to the guide on the coach as at this stage, early in the tour he hadn't really won us over. However, when we got there the decoration over the door caught my eye:

This clearly wasn't an ordinary sort of gentleman's club. It obviously had a history. It turns out that in Tsarist days it was the St Petersburg Officer's Club. Post revolution the Red Army took it over, and it is now the "House of Army and Naval Officers", although I suspect that in deference to the proletarian nature of the revolution that all members of the armed forces made use of it in the early days. 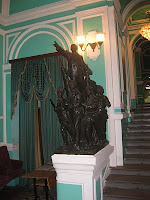 try you are greeted by a magnificent staircase sweeping up to the upper floors. This is flanked by four large bronze statues celebrating the glories of the Red Army. These are really rather magnificent. The most striking one was that of Lenin inspiring the Red Guards, situated on the extreme left (no surprise there then). Alas due to their positioning in the entrance hall it was a bit awkward getting decent pictures, but this one isn't that bad. 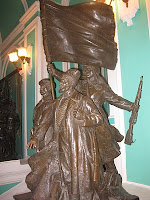 Other bronzes showed the Red Army in its later periods, - here's another picture that came out okay.

Elsewhere the interior was magnificent, with rooms given over the comfortable relaxation and enormous paintings of the victories of the Red Army. Alas I was having problems with my camera settings at this point of the holiday so the pictures aren't really good enough quality to upload.

In many ways the military association wasn't the big surprise of the evening. That was the fact that this seemingly small and unassuming building on a street corner in St Petersburg had a large theatre in it.

And we did see some dancing. And it was pretty good too, - I just wouldn't want to go everynight. 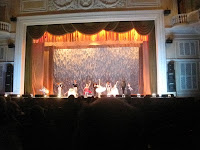