This is my 100th blog posting, which follows on closely from my 9,000 hits. So, a milestone blog in a couple of ways. I had no definite plans for my 100th blog, but a bit of Real life won't hurt. Then I'll post some fairly cool pictures from my Russian holiday.

Real Life, as ever comes first. I have to admit that even as a Grown Up with access to Power Tools I was quite unable to repair the leak under the sink. Previous fix had failed for some reason. Can't see why, as I did a proper job on it not a bodge, but I got home Thursday night to a cupboard full of water. After 30 minutes struggling I have given up, put a washing bowl in it and told Mrs T to find a plumber in the morning. That put me quite out of sorts, but I managed to finish cataloguing my Russian photos and burn then to CD. Or rather 3 CDs, as I may have got a little enthusiastic with the camera, even when I cut the number of photos in half. Still we were able to have a look back on our holiday, although I'll have to re-do the Moscow CD as there's probably too many tanks on it.

Any how, as another Real Life task involved taking young Miss Trebian out to a singing lesson I was able to take some time to fire up the net book and post the story of my epic journey to the Central Army Museum in Moscow.

This museum was recommended by several people on the RCW Yahoo group as it contains some serious stuff on the Red & White armies during the Civil War. I was also told that it was unlikely we'd be able to get there on a package tour.

As it turned out by the end of of our tour some people advanced the opinion that, quite frankly, they'd seen more than enough art to last for a while. After all we'd started with the Hermitage, and Russian Orthodox Churches aren't exactly shy on the paintings front either.

Such it was that the afternoon of our last full day in Moscow had two optional trips, - one being to the Tretyakov Gallery, and the other to a convent. Several days in advance I floated the idea of an alternative trip over dinner. The British guide on the ship I had already sounded out about the practicalities and he said we'd be fine on the Moscow Metro. The couple we were dining with, the lovely Nigel & Rosemary, were surprisingly receptive (I discover later that Rosemary is a regular shooter, and somewhat of a gun aficionado), so we decide to give it a go. A number of other chaps on the boat are keen, but in then end decide that they'd rather accompany their other halves to look at some pictures.

Travelling on a Metro system where you can't read the signs is a bit daunting, but we did the guided tour the night before (yes, you can have a guided tour of the Moscow Metro. It is beautiful) which increased our confidence and we learnt to count the stations, as the platforms do not have station signs that can be read from the train.

Actually it's not too bad. We had a map, and by the end of the holiday I was getting okay at translating Cyrillic to Latin characters.

We had one minor hiccup at one station as the signs weren't too logical, but a nice Russian chap 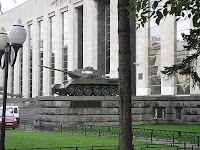 came up and practiced his English and put us on the right path. So after a couple of changes and some use of a locally bought map*, being caught in torrential rain, we finally crossed a road, rounded a corner and saw this tank on a plinth.

Which is really a bit of a giveaway if you're looking for a military museum in Russia. I mean, it's the classic, isn't it? We all built the Airfix kit. 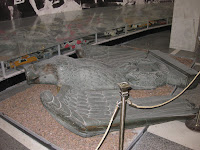 The museum allows pictures taken inside for a small fee, - and it's cheap to go in as well. They have some amazing exhibits, such as this Nazi eagle & swastika that has seen better days. Can't quite place it, - where might I have seen it before? It usually has the Red Army's "Reichstag flag" hung over it, but they were doing some work in that hall, and it wasn't up. 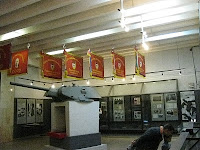 As you might expect large amounts of the museum are given over to the Great Patriotic War, and they certainly like their banners. There's barely a room without half a dozen or so hanging from the ceiling.

And what's more there's a big park out the back with loads of tanks, guns & aircraft. I'll post pictures of those at a later date.

I'd be remiss not to point out that ALL the captions are in Cyrillic and ALL the staff do not speak English. Also they do not sell guidebooks in either Russian or English.

However, can't complain. This is the museum with the biggest collection of stuff on both the Red & White Armies from the Russian Civil War, and I have to say I was positively salivating at the thought of all of those flags and uniforms. I know enough about the period not to need the signs, and what I really wanted was a camera full of pictures

Which was a shame really as the exhibit isn't there any more. Don't know why. All I could get out of the lady at the entrance after we'd been round was a "Nyet", followed by a drumming mime (no - don't get it either).

Ah well. It would have been nice, but in any event it was better than looking at another stack of pictures.

* The Lonely Planet guide to Russia is wrong, - it says the museum is to the west of Novoslobodskaya station and it's actually to the east.
Posted by Trebian at 19:36