I realise that these blogs are sort of coming up out of order, but I thought I'd put them up when I got a theme sorted out in my head.

When we got to Russia our first tourist event was the obligatory coach tour of St Petersburg. These tend to cover a lot of ground in a short space of time and you end up with a lot of blurry photos through coach windows. 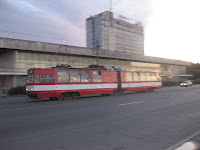 Russia was a constant stream of surprises, - I never really knew exactly what I was expecting but it wasn't usually what we saw. For example, St Petersburg river port (we were on a river cruise from St P to Moscow), is traditional Soviet era architecture. The photo shows a big concrete block with one of the better looking trams going past it.

Those of you who know your "Great Patriotic War" history will be aware that St Petersburg in its guise as Leningrad was subject to a very long and protracted siege that saw a large amount of damage inflicted. As someone who grew up near Coventry and saw the enlightened approach taken to restoring that medieval gem after their visit from the Luftwaffe I was fearful of the worst. 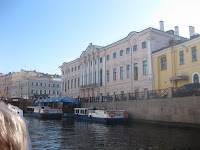 I was pleasantly surprised. St Petersburg is an artificial city, plonked down in a marsh as the capital of a new country by a leader whose name it bears (heard that about anywhere else?). The central part of St Petersburg with its 18th century buildings and its elaborate churches and cathedrals still stands largely untouched except for electricity cables. We took the canal boat ride and the water front is probably indistinguishable from that recognisable to Catherine the Great. 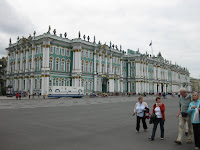 What that means for those of us with an interest in the Revolution (I read John Reed's "Ten Days That Shook The World" on holiday) is that the city plan and aspect is largely unchanged. The square in front of the Winter Palace is uncluttered by new developments, and is free of souvenir barrows (although they have put up some portaloos). Nevsky Prospect has new shops and a few neon signs - and of course a lot of cars - but it is essentially unchanged. The street pattern and the main buildings exist as they were then.

Many of the buildings that are of interest from the Revolutionary period are still there. Of course these buildings have other historical connections as well. The Peter and Paul Fortress, for example, where numerous political prisoners were held (including Lenin's brother I think) is also the burial place of the Tsars. Nicholas II and the remains of the last Romanov were reburied there in 1998. 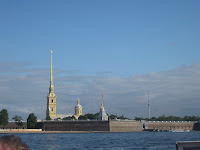 Alas our visit didn't give us time to get inside the building, but I have a few pictures of its exterior. This one is taken from a canal cruise boat. Like most artillery fortresses it isn't the most exciting building from the outside. It is good of the Russians to give any besiegers such a nice aiming point in the form of the cathedral spire however!

On the landward side of the fortress is the Artillery Museum. Again we didn't have time to visit it, - if I hadn't only just got to Russia and wasn't feeling a bit jet lagged I'd probably have braved the metro and gone to have a look. If you have a look at what they've got parked by the road side you can only imagine what's inside (Lenin's armoured car, apparently). 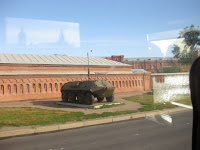 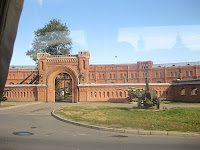 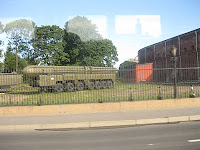 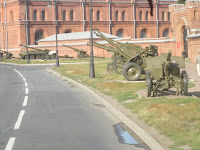