To Derby With An Elephant

Oh My God It's Early! 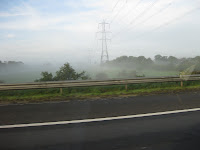 Today is Derby Old Glory World Championship thingy, so I'm up early waiting for my lift. Sure enough pretty much dead on 7:30am Will turns up so Mrs T goes back to bed and we're off. It's a beautiful autumn morning with the mist lying thick over the valley, and the sunshine picking out the treetops. Oh to be in England.....

I normally do two displays a year for the Society of Ancients, - Milton Keynes "Campaign" and the Derby show. They're pretty much the closest to me depending on whether or not there's a show at Birmingham. MK is great because the public have free access, and I do Derby because.....it's close and it's got trade stands.

Actually a number of years ago I took part in the Armati competition at Derby. Had a thoroughly good time and finished about half way up the time, but it isn't really me.

Anyhow, back to this year. I'm taking "The Elephant in the Room", and President Steele will be there as well with his "Greyhounds in the Slips" so we'll be promoting the wargaming usage of dominoes pretty heavily. The games make a good pair as they're quick and easy to play and they have a slightly different way of resolving combat and so on compared to the "normal" wargame. They're both also visually quite striking, - GiTS uses 90mm knights & TEITR uses a 54mm elephant.

So, Derby it is. I'm looking forward to meeting the great wargaming public, some old friends and some traders willing to part me from my money (wothcha Dave Lanchester!)

Update later.
Posted by Trebian at 07:52