This blog was supposed to be a follow up to the last entry to describe how we got on with Thursday evening's game. I'll will write that up this weekend sometime, but in addition to turning up last night one of my fellow gamers brought along a copy or two of the Society of Ancients' incentive game that I've been wittering on about from time to time. 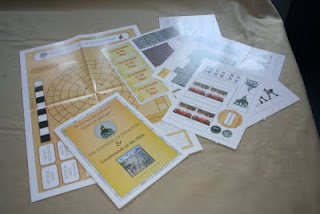 Like anyone who has ever done anything creative I got quite excited when the stuff turned up. I've only seen it in mock-ups or from my ink jet printer so to see the final version was quite good, to put it mildly. In particular I'd never seen the game board done properly as I can't print on to A2 paper.

So here's a picture of all of the bits you get in the packet. The game board is double sided, so you can only see the Elephant in the Room side in this picture.

The moment I picked up the booklet I spotted a couple of typos and a punctuation error, but other wise it looked okay. 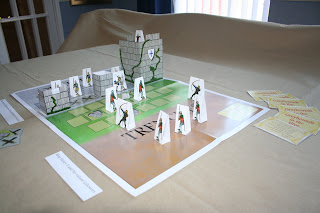 The unique bit about this project has been the attempt to re-create two show participation games. So for the Greyhounds in the Slips game we thought we'd put in a bit of showmanship. This meant the inclusion of some 3D pieces in the package, so I spent a little while this afternoon sitting in the sun assembling them. Don't know if the picture does it justice, but I'm pleased with the outcome.

Tomorrow I'll make up the other game, although as Mrs Trebian has pointed out I've got the originals so why am I bothering.

Feedback from Salute was that footfall past the stand was quite low compared to other shows. Phil managed to run GitS about 4 times, which is well short of normal, but he also sold 8 copies of the game, so that's quite a good conversion rate. Whilst the aim of the Society isn't to sell as many games as possible it is nice to see initial indications of a vindication of the strategy of tying the incentive game into participation on the Society's stand. Hopefully it will also lead to converting more casual browsers to full members as well.
Posted by Trebian at 17:02

Email ThisBlogThis!Share to TwitterShare to FacebookShare to Pinterest
Labels: Greyhounds in the Slips, Salute, Society of Ancients, The Elephant in the Room