Had a real grown up bank holiday. It consisted of:

Not a lot to say about the rain, except it kept me out of the garden which was a nuisance as I need to re-seed part of the lawn.

However I got stuck into painting the woodwork in one of the bedrooms/en suites which took up a fair chunk of Saturday. At least with these new water based gloss paints you can get both coats done in a day with little trouble, and it doesn't stink the house out like the old style gloss paints.

Sunday was the stately home. 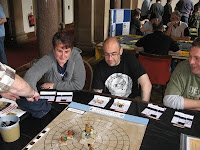 Well, actually it was a wargames show, - Partizan at Kelham Hall. I was part of the Society of Ancients shows team for the day, and took "The Elephant in the Room" out for the first time since we published the game.

It was an enjoyable day. Played the game 7 or 8 times (although the first three games were disasters, over in about three moves each). The Romans won all the games in the day, but we had some near run things. This photo is of a game where the Romans were down to three figures before the elephant finally keeled over.

Footfall for the show was down on previous years, probably affected by the close proximity of Triples. It was easy to get round the trade stands, but several of them had obviously off loaded a lot of stock the previous week. It did mean that we had enough room to run the game comfortably, but we also had some long barren periods with no punters about. Having said that I thnk we sold 7 copies of the game, so that's a good hit rate.

On the trade stand front I picked up a pre-order from Peter Pig (more SCW regulars), a couple of the Zvezda plastic 1/100 BT-5 kits and a few Spanish buildings from Hovels.

We got away promptly as the show was dying rapidly in the afternoon, so home for a Bank Holiday Sunday Roast.

Monday morning was spent tidying up after the DIY on Saturday, and then doing some wargamer-y things. I've decided to colour code the back of my unit stands as I can't tell my militia or EP units apart. The armies are getting a decent size now and the production line is working nicely. Even found time to paint up a couple of buildings from yesterday. The afternoon was spent checking up on my parents who are now in their late 80s. My father has an unfortunate tendency to keep falling over and having to go to hospital for check ups.

The positive side was I convinced them to set up internet banking on their accounts. Despite having a PC and connection they never use it, but this means I can sort their bills and transfers out without having to take piles of authorities to the bank. Isn't technology wonderful.

And back to the rain...well it wouldn't be May bank holiday without the test match being ruined by the weather. Hold on, miracle of miracles, England have pulled off a win.