Design work on Send Not To Know is probably in its end game (except that my rules sets never really get finished completely. I’m always fiddling with bits and pieces but I understand Tony Bath never finished amending his ancient rules so I’m in good company.)

The Spanish Civil War is proving to be a really interesting project and I can see that there is a need for games at different levels of resolution once SNTK is “finalised”.

Anyway, another Thursday, another playtest, ahead of a big all day thrash this Sunday. That should resolve most of my issues before CoW so I can focus on getting the figures painted and doing all of the other bits and pieces such as producing playing aids and getting the rules into booklet format.

The conclusion from the playtest is that most of the mechanisms are working, but that some of the factors may need to be moved up or down. We’re into exactly what number needs to be rolled on the die to guarantee a hit and so on.

The unique selling points for this game were fourfold:

1) The presence on the Nationalist side of some regular infantry, thus reducing the number of SFL “super troops” that get deployed.
2) The re-introduction of armour.
3) The first outing of my new building collection.
4) The introduction of colour coded dice, - red for d6, yellow for d8 & purple for d10s to stop players rolling the wrong dice.

I also had made a few changes to small arms firing and the way artillery bombardment starts and ends. Finally I opened up the battlefield a bit so I can see what happens to units that advance in the open (I hope I’m not getting too far ahead of myself when I tell you it isn’t pretty). 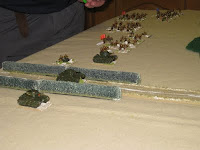 The Nationalists had some SFL & Moroccans, some regular army and some Falangists. They also had a couple of field guns. In the absence of our regular Fascist player we also had a new commander. The Republic was represented by four battalions of IB (ie a full brigade, no less) together with their Anti-Tank battery and three battalions of Ejecito Populare. They were supported by three (yes, count them, three) T-26s. 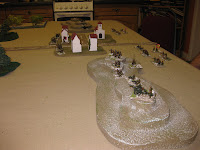 The scenario was a bit hastily put together I have to admit. The Fascists were holding a small town in the valley between two ridge lines. The Republicans were the other side of a fairly open plain, but they were able to form up in a couple of the ubiquitous olive groves and a few patches of trees also provided a bit of cover.

Unusually the Republicans had a marginal advantage in organisational efficiency as they were no longer trying to tie in so many disparate units. However that didn’t stop the defending Nationalists from getting the advantage in the early stages of the game.

The opening turn saw the Nationalists hit some exposed Republican units with their artillery. Not tremendously accurately or effective as an off target shoot had to be corrected by the Observer and then resulted in minimal blast markers being inflicted.

The Republic tried a general push all along the line, with the centre of their opponent’s position being softened up by barrage fire from the T-26s & the anti-tank gun. This became a theme for the game as the tanks settled into their role as static artillery and just pounded the village. I should have brought along my wrecked buildings.

It was quite a slow moving game in some ways. A Nationalist artillery strike in the middle of the board held up not just the unit it hit, but another one queued up behind it. On the Republican’s left one of the IB battalions got caught in the open by the Nationalist battalion on the ridge line and took a severe pounding. 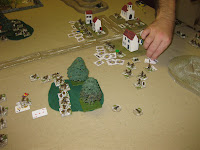 The concentration of the Republican commander on using his armour and guns to blow up the Falangists in the village meant that there were fewer command cards for the rest of the army. Allied to the occasional artillery hit from the Nationalist batteries the general infantry advance got heavily bogged done. Bored with the whole thing (and, I would add, misunderstanding a change to the rules) the Nationalist commander pushed forward his two wings and walked into a whole hill of pain as close assaults went horribly wrong and he was left falling back to his starting position. 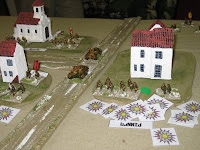 By this point a couple of Panzer 1’s had turned up and made an aggressive push down the main road in the middle of the board. Catching the T-26’s unawares the lead tank accelerated into close contact range and opened up with armoured piercing fire from his twin HMGs. Alas this was to no avail, leaving us at games end with him perched in the precarious position of being within point blank range of the T-26’s much feared 45mm cannon.

I’ve obviously still got work to do. There were a number of unintentional irritants for the players so they need to be turned into intentional irritants or done away with. The HE v armour rules are a bit rudimentary, as are those for the airstrikes. I also need to add rules for the “big beasts” of the conflict, most notably the 88mm and the Italian CV35 with flamethrower (one of our group has both of these. He’ll be discouraged from using them by being forced to take lots of Italians to go with them).

Next up, militia defending trenches, I think.
Posted by Trebian at 17:44