Your Plastic Pal Who's Fun To Be With

I have referred to this in passing in a previous blog, but I did recently acquire a couple of plastic 1/100 scale BT-5s from Zvezda.

In truth I did not really need them. Based on the number of tanks in the Spanish Civil War I am massively over-supplied. I probably have enough Renault FT-17s to deploy the entire Spanish Army's force on a scale of 1:1. Still, the BT-5 is quite a nice looking vehicle and the kit was only £2.75.

Here's a picture of the box: 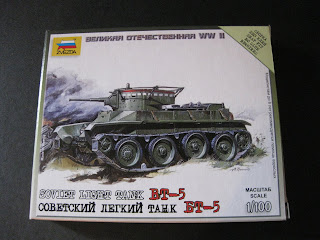 First point I would make is that you do NOT get the command aerial in this kit which is a bit of a shame. What you do get is this: 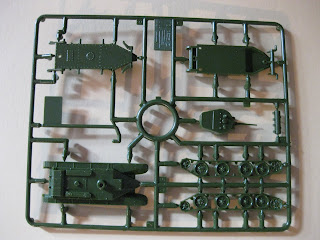 Yup. One sprue. But the detail is pretty good, I have to say. And if you just want wargaming models then you don't want to be fiddling about for ages like you used to have to do with the old Airfix Churchill.


It's a push together kit, and it goes together quite nicely. I've glued mine to keep the turret in place and to protect the slim gun barrel. 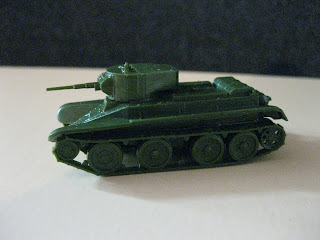 Here's what it looks like all painted, varnished & based. With a little bit of flock. 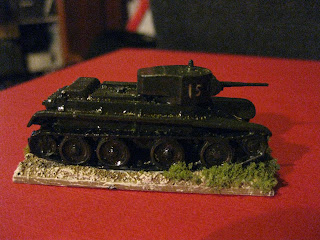 And finally here it is up next to a Peter Pig T-26. 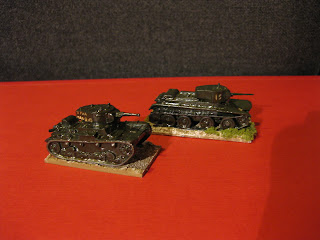 I think that it looks slightly small in comparison. I suspect that the Zvezda model is more precise in its dimensions because typically Zvezda are very precise in what they do. I also think that PP models are often slightly "beefed up" to maker them more robust. The barrel here is a good example. Personally I prefer them that way, but they don't make a BT-5, so what are you going to do?

All things considered a nice kit & I'm glad I bought a couple.
Posted by Trebian at 20:49