Here's the next set of figures in the mystery army  (for the start of this excitement and the original clues as to what's going on see: Can you tell.... ).

There's only one element of them instead of the usual two needed for an Armati heavy cavalry unit as I've cut back on the numbers with the aim of finishing a DBA army on the way to the complete Armati set up. And they seem to have taken and age to paint.

The delay in their production has been two fold. Firstly serious bouts of Real Life have piled in on me, - my parents are getting on and we have reached a can't-really-live-at-home-don't-want-to-move stage, so there's hospitals and social workers involved. Plus there's lots of exciting stuff going on at work. And Miss T has found a flat near her new job (which is miles away) so she is preparing to move out.

The other reason is the change in painting style. These are done with a white undercoat and highlighting and a mix of magic dip varnish, inks and clear varnish to finish them off.

I'm not convinced my eyes are up to this (more Real Life - had to go to the opticians for an eye test today. I now get free tests and a discount on my lenses on account of medical history and the fact I can't see across a matchbox, let alone a room). Plus it is more fiddly to do as there's more layers to be done than compared to the Trebian method. On the other hand I can't argue that the colours are brighter than normal. 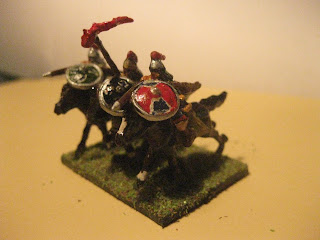 So, here we have some Gothic cavalry to go with the Moors. They're a nice active pose, although they are a bit big for the standard 40mm x 30mm bases, and overhang both front and back. They're a bit of an awkward pose to paint as well, once they're glued on the horse but I'm pleased with them.