Our group was supposed to be doing some Mexican war thing this Thursday, but due to an unfortunate incident the organiser had to drop out. However, following our recent interesting goes at Zulus and Redcoats with Black Powder I volunteered to have a go with BP in the Sudan.

I used the El-Teb scenario in the back of the book as a starting point for the forces and stats, although I cut back on some of the troop types and factors. In particular I reduced the awesome power of the British Hussars, who seem to be armed with phasers and chainsaws.

Very cleverly I forgot my camera, so I was reduced to taking a few snapshots on my Blackberry.

As ever with Black Powder it gave us an amusing evening but it's never quite right. You wonder what books the authors have been reading if they think that cavalry is a war winning weapon against the frightening Fuzzy-Wuzzy. Their effectiveness and the whole set of rules about infantry fighting cavalry need to be looked at if we're going to use them again. I also don't get why Highlanders have better HtH factors than Fuzzies and also better stamina.

The British were on a punitive expedition against a lonely village, fronted by a wadi, and flanked by some hills. The approach march was halting due to some poor command rolls, until the lead brigade blundered and veered off at an angle. 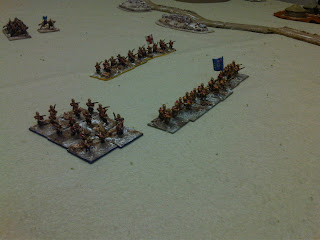 Here you can see that they've successfully exposed their flank to the wadi at the top of the screen, thus tempting the Dervishes to launch a full scale assault. Again, thanks to poor command rolls they decided to stay concealed behind the hills, and encourage further British indiscretions.

Eventually the Dervishes came out of hiding and decided to set-too. 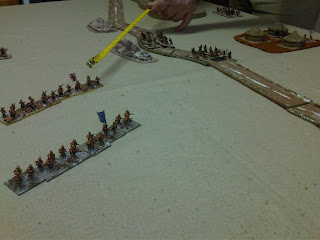 Here you can see them try to launch an attack from the wadi. They moved off, but only got one move segment so didn't make it (we were using centimetres for inches as these are 15mm figures). This timidity on the part of the dervish hordes gave the Brits a chance to recover and form the obligatory Brigade Square. 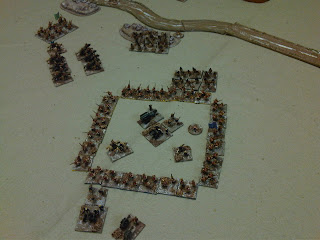 The square was formed in a hurry, and the infantry just about made it. You can see to the bottom of the picture the Gardner gun and a packed up screw gun that got left outside. The other brigade artillery is still milling around in the middle of the square with the water bowser, out of formation, as the fuzzies slam into the front face. Meanwhile the Northampton Yeomanry square up to the supporting dervish warband.

This was the main confrontation of the evening. The attack on the square took three turns to fight off. The dervishes survived repeated break tests for losing melee, which was only fair as the British had outrageous luck on their saving rolls. The cavalry broke that warband, but the lead regiment was likewise destroyed by some others coming up into support.

Off picture to the top the Highlanders from the other brigade lined the wadi and tried to shoot off three or four dervish warbands. They failed, - the shooting was okay, but the melee didn't go their way as two warbands managed to pool resources in the fight.

So we called it a day. Marginal British victory, but the loss of a cavalry and an infantry regiment was quite a high price to pay.

BP did the job on the evening, but they're clearly a Napoleonic set of rules that's just spread out in either direction. The factors and rules for colonial forces just aren't quite there, although no doubt the colonial supplement whenever it turns up will solve that.

For preference I'd play Science v Pluck, but that's harder work for the umpire and the players so BP fitted the bill this week.

We may return when I remeber my camera.
Posted by Trebian at 20:03