Okay, so the secret is out, but having started with this as a title for postings on this army I'm reluctant to change tack.

Here's the latest batch of recruits to Belisarius' adventure. The Armati army list rather grandly lists them as "Hippo-Toxotoi", which translates as Horse Archers.

The haven't come up too bad. The paint job is based on the illustrations in Roy Boss' book on Justinian's wars published by Montvert (now alas out of print and selling at premium prices.

Despite my new close up glasses I had made especially for painting and a 000 paintbrush I'm still struggling with the fine details. The chequer piping on the archer's clothing makes them look a little like they're wearing pyjamas, and that isn't the best ever "Chi-Rho" on the standard. The difficulty isn't my eyesight but a small lack of motor control in my painting hand that derives from some neck and back problems I had a few years ago. It's frustrating to admit it, but I have to recognise that I've now got figures in my collection that I won't surpass in terms of painting quality. I'm also finding that I really shouldn't paint for more than a hour at a time.

Apart from that I think they'll look fine on the table top, and for these figures I've also got a picture of them from behind. 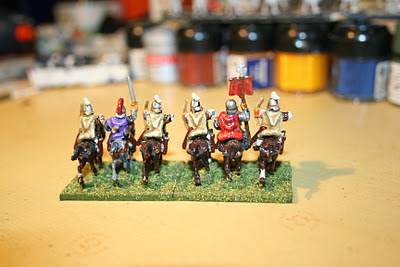 They warrant a reverse shot as I put a lot of work into the shading on the cloaks, so it seems a pity to waste it.

I suspect that we don't pay enough attention to the backs of our figures. After all the fronts get shields or lace frogging and so on, depending on the period. However, unless you are really unlucky as a player you'll actually spend most of your time looking at the backs of your figures as they march remorselessly towards your opponents. I suppose a well painted front may intimidate your enemy, but it may just be a lot of wasted effort from the point of view of personal pleasure during the game.

Next up will be some Auxilia Palantina, followed by some Huns. This army has a lot of variety in it, but there's also a lot of some units to paint. The Hippo Toxotoi in particular are a significant proportion of the army. I'm pretty sure this won't be finished in time for my annual "Attack of the Killer Wind Up Christmas Puddings" game, which is a shame as my regular opponent has an exact contemporary army to take it on. That, likewise, is stuffed full of cavalry so it'll be a whirling frenetic affair when they finally get to grips.
Posted by Trebian at 16:29