At last some of the classic Trebian troop type, - heavy infantry.
Well, I say “Heavy Infantry” but this is really a poor shower compared to the Legionnaries , Phalangites and Hoplites that grace my largest and most long standing armies.
I mean, even the Carthaginians have some heavies in armour, although admittedly that’s 600 years beforehand.
So here are some “Auxilia Palantina” which is what passes for backbone for this army. Okay, I know you can dismount some of the cataphracts but that would mean buying extra figures and, come on guys, they’re CATAPHRACTS!! Why would I take them off their horses? In Armati terms they’re hard as nails, armed to the teeth and don’t suffer from the obligatory charge move.
Any how, back to my new recruits. The figures are a bit flat and ideally in a unit of this size & type I’d like a variety of poses. If they’re massed infantry shield-wall legionary types then a single pose, standing shoulder to shoulder is a winner, but these don’t really fit that mould. As they’re basically javelin chuckers. 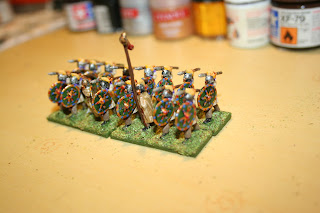 The figures are not only a bit flat, but they’re a bit bland. The lack of heavy detailing/folds in their tunics makes the shading a bit of a challenge although they’re probably more authentic for not having lots of deep cutting in the design style. There’s actually some nice detailing on the figures in the tunic yoke and the decoration near the tunic hem. Alas a layer of undercoat followed by blocking in with a mixed off-white matt vinyl emulsion rather obscured it all. Again, it’s probably an authentic depth but it isn’t doing any favours with the dry brushing. 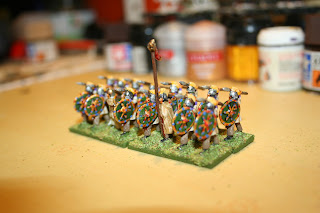 They’re painted up okay. The shields are quite ambitious for me with the Chi-Rho and inset colours. I’m not sure I’ve pulled it off. They look a little bit too busy in all honesty. I have another unit to paint and I’ll be going for a brighter more geometric design for them, I think.
Still they’ll plug the middle of my battle line, and form a base from which my cavalry can launch devastating attacks on my less civilised opponents. 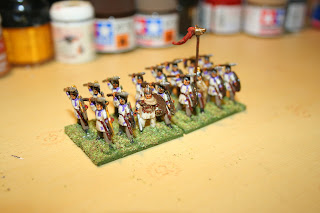 My last thoughts cover the overall authenticity of using these figures. Our sources in some areas aren’t great and there’s a general feeling that generic Auxilia Palantina of this type hung around in the same style kit for 300 years. That doesn’t convince me, but then how much variation can you get in a loose fitting tunic and a big oval shield? 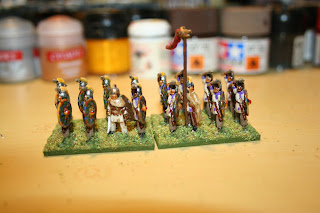