I remarked in an earlier post that I'd been looking for some contemporary accounts of the Spanish Civil War. I managed to pick up what I thought would be a nice matched pair, - "The Civil War in Spain" by Frank Jellinek the Manchester Guardian's foreign correspondent in Barcelona, and "March of a Nation" by Harold Cardoza, the Daily Mail's Special Correspondent.* 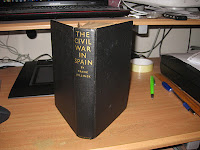 I have just succeeded in finishing Jellinek's book, and I have to say it was interesting if a bit of a struggle. It is in many ways one of the most..."worthy" book I have read for a long time. It was written in 1937, so before the war had finished. Whilst Jellinek was not a Communist he is certainly a Marxist historian, and the book is written in the Marxist scientific-history style. All the elements of the lead up to the war and the war itself are shown as part of an inevitable struggle. The Workers, the Bourgeois and the Petty-Bourgeois all follow the lines that Marx indicated they would. Lenin's views on the elements of the class struggle are quoted with admiration.

Of course when the book was written no one knew what Stalin was up to so the USSR is seen as the most modern and progressive state, so the Stalinist attack on the POUM is fully justified in this book.

Was it of any use to me? Well it certainly helps you to understand the frame of mind that people were in at the time. It isn't a memoir looking back, - it is genuine contemporary history with no knowledge of the outcome. It is fairly light weight on the military aspects (except for one thing - see below) as these are merely the backdrop to a class struggle. It is also much, much, stronger on the struggle in Catalonia than it is on anywhere else in Spain. It's handling of the political contemporary background is also informative as it plays up what was in the news at the time, - for example the abdication crisis in Britain.

Where it is good is the coverage of the rising in Barcelona. There's lots of good detail written with a reporter's eye and even if it isn't completely accurate the colour and feeling it portrays is excellent. Alas he is fairly liberal in the use of the word "tank" and seems to feel that Spanish factories were actually turning them out. I suspect he means armoured cars, although he refers to these as well.

It is also, obviously, very pro-Republic. The Popular Army is described at one point as "one of the finest fighting forces in the world". The Moors and the SFL are mere mercenaries, and all military successes are attributed to the Italians, who achieve these despite being cowardly and running away. The Popular Army was "entirely" successful at the Battle of Brunete, unlike the Nationalists who may have captured some important towns but "had not one any major battle" except for the unequal struggle in the Basque country.

So some of it is, in retrospect, quite amusing to read, but it is tremendously hard going, with massive slugs of quotations from speeches and meeting resolutions quoted verbatim (and the stuff about collectivisation is very, very, dull).

I'm glad I read it and some of the detail from the Barcelona accounts will turn up in a game at some point, but would I recommend it to any of my friends? Not if I want to keep them, I suspect. I was going to read Cardoza's book back to back with this one, but frankly I can't face it, so I'm reading an Iain M Banks sf novel instead.


* For my non-British readers the Manchester Guardian (now the Guardian) was and is the broadsheet of the left, although not socialist. The Daily Mail is the paper read by the right thinking middle classes. Its favourite targets are benefit scroungers (especially single parents) and asylum seekers.
Posted by Trebian at 17:34