The Joy of Set (pieces)

Our group has sort of had a misfired Christmas Special game. Partly my fault as I can’t make next week’s session and so I asked for it to be brought forwardto this Thursday.
Phil obliged, although he hadn’t finished all of his planned work for the game, so it was sort of a play test as much of a game.
The game was a multiplayer scenario using the original “AK47 Republic” mechanisms to drive movement, combat and morale. The scenario had a four or five cornered situation with two warlords, a President-for-life, the UN and the press all coming together for the President’s birthday parade which was coinciding with the UN’s attempt to dispose of a thinly disguised WMD.

Now this is a lot of stuff going on and we had to extemporise some of the details as Phil hadn’t been given enough time to write out the full briefings and we were a few rule mechanisms short. In my experience the best way of dealing with this type of game is to use Matrix game techniques (particularly Politics By other Means) which have been used in similar scenarios set in Zambola featuring the infamous President Jog-Jog that have been played at CoW. On the other hand it is a bit of a cheat as you don’t need to think things through properly and rely on the players to fill in the gaps. However the matrix game is not to everyone’s liking and our group has fallen out over them in the past so a more structured game is probably the answer.
The highlight of the evening was Phil producing all of his AK47 kit that’s he’s been working on over the last few years, so you’ll have to excuse me if I post a bit of eye candy. As I’ve indicated before I’ve got a fairly functional approach to my armies. I want armies I want them painted. Therefore I paint them. I adopt a minimalist approach to what I do to ensure I get the most stuff done in the shortest period. Gone are the days when I altered figure poses for the fun of it.
Phil on the other hand just loves producing beautiful stuff that also tells a story. Lots of his kit falls into the “mini diorama” category, with little set pieces or vignettes littering the battlefield. Have a look at his overloaded Hummer and Landrover for example. 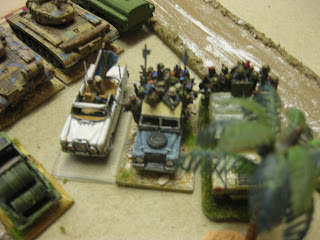 Sometimes he’s just showing off, like he does with the airstrike marker. I think I’m doing pretty well if I produce laminated cardboard counters. 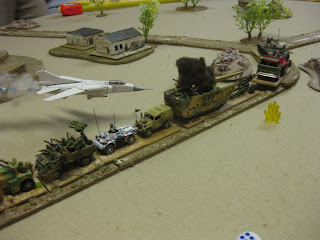 We only managed to get in about 3 turns before we packed up, but we’d had a fair amount of action by then (I’d stolen a speed boat for example and caused the heavy lifting crane to have a problem).

Let's just finish off with a picture of Phil's airfield and Presidential convoy: 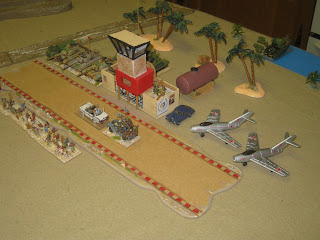