At last, something to do with wargaming

The advice from some people has been to give myself permission to relax and take some time out. Easier said than done, but probably good advice.

I never thought I'd suffer from "painter's block" but I've struggled to pick up a brush with any heart at all. However, I've forced myself to get back to it, so here's a photo of the results. 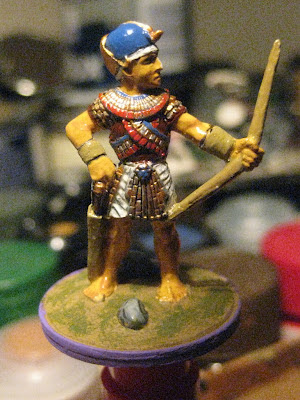 Okay, so this isn't usual Trebian territory. He's 28mm tall, he's a bit muscled and there's no Ronseal varnish in sight. Although I can't do that GW paint style, I'm really pleased with the outcome. The modern 28mm painting style follows strict convention, - a bit like always painting the sky and rivers blue. That doesn't mean they look realistic!

Any how, this is Xyston's Ramesses II personality figure. He's actually quite nicely proportioned and not massively muscled or grotesque. I understand he was designed by Dave of Hasselfree Miniatures, - if so, nice work Dave.

So he's all ready now to take part in the next run through of "Call it Qids", and he'll be making an appearance or two on the shows circuit this year (although I confess the design is unlikely to be creditted as unlike the Baccus stuff and the Warbases I'm using I had to pay for this fellow with my own money.
Posted by Trebian at 19:05