The A to Z of Acacias & Zaribas

In any account of any British campaign in Africa at some point the Empire forces set up a zariba. This is simply described by most writers as being formed from branches of the acacia tree. The acacia likewise turns up in the account of the end of Hicks Pasha as his column forces its way through an acacia forest.
I've had several holidays in Africa, - three in the north and one now in sub-Saharan Africa. When we visited Egypt and travelled on Lake Nasser we saw a lot of acacia in the near distance, but never looked at it close up. In our trip to Tanzania we got up close and personal with our thorny friend.
I mean you read the accounts of them using it to make a defensive screen because of its thorns, but how thorny is it exactly? I mean are we talking roses, hawthorn or berberis? And how big is it as a bush or tree? 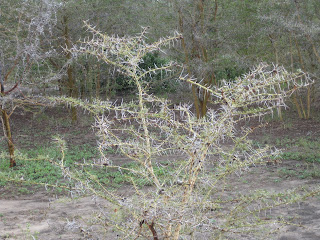 The first picture here shows an acacia tree at the edge of a road, near to a patch of such trees. When ever I've seen them they don't grow impenetrably densely. You can walk easily between them if you don't mind the odd branch sticking out. I guess as they grow in fairly dry climates they can't grow too closely together or the root system won't be able to get enough water. This also means that they are not excessively tall, although the spread of the branches can be impressive. The branches aren't that thick however, so it is obvious that you're not building a fence out of it. The business end is clearly the thorn. 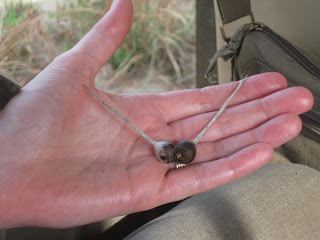 So, to picture number two. This shows a pair of acacia thorns in the palm of Mrs T (by the way the little seed pods/galls have a little hole in them. When the wind blows acacia trees “whistle” like a swarm of insects). As you can see we are talking quite a long thorn, - a couple of inches in this case. They're also pretty tough and don't snap easily. And yes, they are sharp, as determined by detailed finger tip examination (ouch!)
So in my view the acacia thorn is quite capable not only of snagging most clothing, but also going through it too and for those without or just dressed in a loin cloth they must have provided a fairly impenetrable barrier.
So, how do you deal with such an obstacle? There's not much cares to take on the acacia in the wild. However I did learn that acacia forms a substantial part of the giraffe diet, which raises the prospect of giraffe mounted stealth units tasked with eating their way surreptitiously into the Empire forces' zariba. It would make a change from those camel units, after all.
Of course the acacia has one last trick up its sleeve. It has a symbiotic relationship with a type of ant which builds nests in its branches. When the giraffe starts to nibble it disturbs the ant which swarms all over the tree. Giraffes apparently don't care for creepy crawlies on their tongues and move on to a less well prepared tree.
The things you learn.
Posted by Trebian at 10:33