Following the completion of the Show Qids board as revealed in yesterday's blog an ex-work colleague of mine dropped round for a full dress rehearsal (yes, I worked in a department with TWO wargamers in it! Can you believe it??)

Safe to say the game did not disappoint. We played it twice, with two wins to the Hittites at the upper end of their victory conditions. 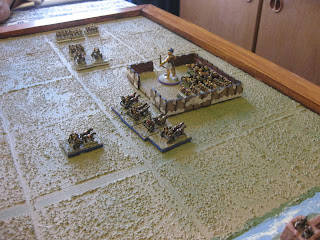 Here I am as the Hittites assaulting the camp, with most of Amun having fled. I had a really slow time activating my ambush, so there's only a few chariots involved as the others tackle Pre at the other end of the board. 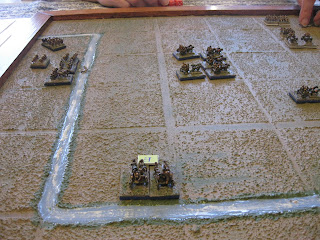 Pre had got split, with half trapped the other side of the ford. The Hittite chariots in the middle have just wiped out the head of the column. Although we're half way through the game one group of Hittites still haven't managed to get going. Words will be had!


I eventually pulled the game out of the bag by capturing Ramesses in the final turn, to give me a victory of the scale of the historical Hittite win.

The second game did not go well for me as Ramesses. 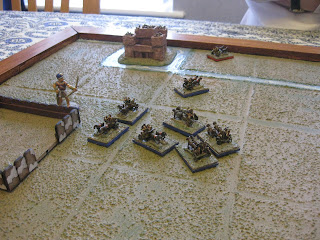 This is the game in the last move. That's Ramesses standing, on his own, as the Hittites retire back behind the Arantu to regroup and divide up the spoils. I'd lost everything, - not just the baggage, but every unit in the Egyptian army, Nearin included (although half of them didn't make it on to the board, so technically I didn't lose the whole army). This gave the Hittites the most extreme result possible, which is:

"Ramesses barely escapes with his army from the two days of fighting at Qids.  The Hittites retake Amurru and conquer Upi, which causes rebellion against Egyptian overlordship through the south Levantine states.  Ramesses is forced to renounce all Egyptian interests north of Megiddo.  The future for Ramesses, as Pharaoh, looks poor."

Anyhow, my opponent went away happy, declaring it a very enjoyable game. Plus, again, two games that played very differently. I really do hope that Society members get this out and give it a go when it arrives.

Note to self: Task for tomorrow, - burn files to CD for printer.
Posted by Trebian at 18:44