A few years ago I was awarded one of the Society of Ancients' annual prizes which turned out to be an autographed copy of Phil Sabin's "Lost Battles". I have remarked on this blog and in Slingshot that LB is a handbook to help refight most of the classical period battles as it clearly lays out the forces, the terrain and the course of the action, together with any special one-offs you need to consider.

At that point I resolved to refight them using Neil Thomas' "Ancient and Medieval Wargaming", did Marathon, wrote it up for Slingshot and then promptly moved on to something else.

Well, this week, I went back and did a second one, - this time Cunaxa. There's a real challenge in adapting the game as AMW is for sides with equal numbers of units, and Cunaxa is not an equal battle. And for me I found I had none of the appropriate troop types. However some later period Persians got pressed into service, and after all a hoplite's a hoplite and I've got loads of them.

The AMW rules require you to force your armies into 8 units a side which requires some hard decisions to be made, - just as in DBA. It may reduce the finesse some might like, but it forces you to decide what is important in the battle.

In this case it wasn't too hard, although some small units of light cavalry didn't make the final cut.

In many ways the game was unremarkable. Both lines set to each other in even measure, the two central cavalry units seemingly prepared to hazard all to chance. 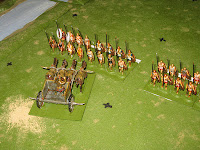 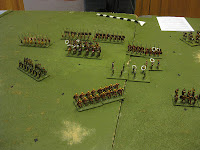 After this excitement the infantry wings near the river closed steadily on each other and the cavalry in the centre got to grips with each other. This turned into a protracted slog, which I ultimately lost. 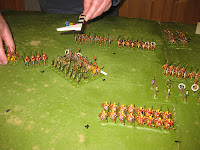 This loss wasn't too bad, as the winning cavalry committed suicide by charging into an undamaged heavy infantry units, although this did open me up to a flank attack. On the other hand this distracted Cyrus from the light cavalry I'd got round the rear of his army and was inflicting casualties on various units. 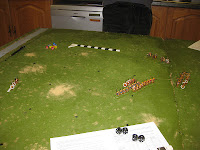 The light cavalry inflicted enough hits to give me the edge in most of the central combats, and the Greeks were unlucky on several rolls. Units dropped like flies and we had a nail biting conclusion in which Cyrus' army finally collapsed and I won with enough troops left over to fill an egg cup.

The lesson from the game was that we needed several tweaks to the rules to make this work as a game, which I have duly added to the article for Slingshot.

Still it passed an evening.