...seems to have slipped from my brain!

After a break of at least 6 months the Monday Night Group went back to the Spanish Civil War this week, to revisit the rules I demonstrated at CoW in June last year. "Send Not To Know" (a.k.a "SNTK") is a set of rules for brigade/divisional level actions using 15mm figures. I'm quite proud of how they work, although their reception at CoW was distinctly underwhelming.

Any how, I haven't done anything SCW related since CoW, so I pulled out the rules and re-read them over the weekend. Whilst I still quite like them I was surprised at how much of the system I'd forgotten and also by the fact that several key points were missing from the rules booklet. Clearly when we were developing them some things were so obvious (eg how many hits to remove a stand) that I didn't need to write them down. Hmm. That's a mistake I've now rectified.

So, for Monday's game a gentle re-introduction with simple troop types, no off table assets and a minimum of tanks and artillery.

The scenario was early in the war. A column of Spanish Foreign Legion, together with some units of Moroccans are heading up the road in trucks towards Madrid, led by an armoured car. The local union-based militia (including one group of anarchists) have set themselves up to ambush the column and hopefully wipe it out. They have coerced some local artillery men to drag along a field gun to support their position. The Fascists were played by Will, the anti-Fascists by Chris K, supported by Phil as it was Chris' first game using the system.

I kicked the game off at the point the ambush is sprung, so the militia went first and managed to hit all of the trucks*, forcing the Legion to de-bus and pinning them as well. They waited for the Moroccans to counter-attack the ambushing troops before launching a close assault by another unit of militia from the other side of the road. This is the situation towards the end of turn 1. 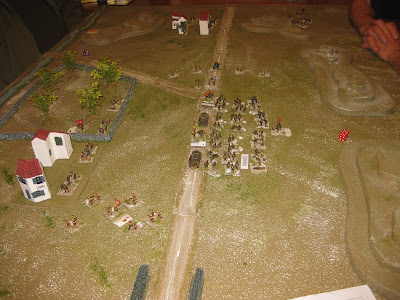 Despite their revolutionary fervour the attacking union militia was unable to press home their advantage and were seen off by the Legionnaires, although with minimal casualties. The Moroccans, however (bottom left of the picture) took the village at the point of the bayonet, driving the militia back across the stream. 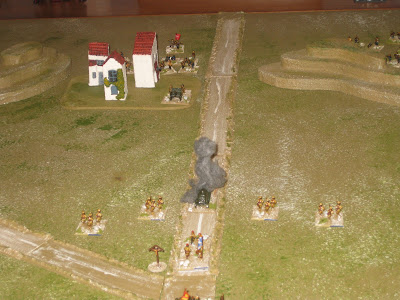 The Republican forces then struck a serious blow by manhandling their field gun into position and knocking out the armoured car with their first shot. The Moroccans at the head of the column then veered off to the left to clear out the olive grove of further ambushers.

Inspired by the success of the artillery and noting that the Moroccans were distracted the Anarchist militia decided to launch a frontal assault on the Legionnaires who were still skulking down behind their vehicles. 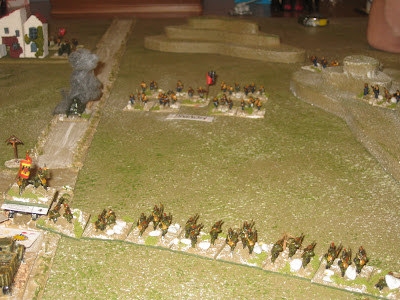 Alas for the anarchists the Legion managed to sort itself into a firing line, and the militia men were given an object lesson in the effectiveness of modern small arms against targets in the open. First they were pinned down, then wiped out to a man, creating some brave, but ultimately stupid, martyrs for the cause.

Having destroyed these brave men the Legion then developed its advance on the right, fighting up through the  ridge line, forcing the occupying militias back and breaking them. On their left the Moroccans finally fought their way into the olive grove, having been temporarily pinned by an artillery salvo or two, and dealt with the militia in there. However their victory was short lived as a militia unit finally got it right and charged them in the flank. Some suitably heroic die rolling helped them out, and the Moroccans were soon fleeing in disarray. 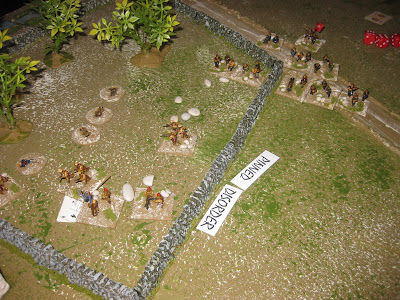 At this point the Legion mounted up in their trucks and drove off, claiming total victory, and I'm left wondering whether I've got this account of the battle completely right as I didn't take any more photographs and I recall a unit of Moroccans storming the gun position at some point. I think this was the original group from the initial village assault who had gradually moved up from the rear to the front to take over point.

Whatever - everyone claimed to have had an enjoyable evening's gaming, with both sides able to claim some form of success. I, on the other hand, am aware that I need to overhaul some more bits of the rules and clarify how the activation sequence works when units are pinned and also need to think some more about how infantry in trucks works. I also want to fiddle with the artillery effectiveness.

* The eagle eyed amongst you will recognise that the trucks in the picture are actually Russian Gaz trucks from the Peter Pig WW2 range and so are not authentic. In my defence the Gaz is based on a contemporary American vehicle I think, I don't have (not do I intend to buy) a load of Spanish vehicles, and all my other trucks from the RCW & WWI are based on green bases and so don't match.

PS: Got my brother out of hospital today. He's a bit wobbly on his legs and he needs several weeks to recover, but he can walk and it's a relief to all of us seeing him up and about.