After last week's "Non Pasaran!" type game on the road to Madrid, it was the turn of the Republic to unleash the whirlwind.

For this scenario we had a Republican counter-attack, again around the area of Madrid, in a sort of Battle of Brunete style. 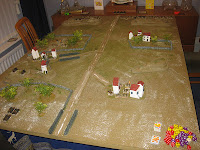 This is an overview of the board. At the top of the picture you can just see a ridge line, with a road running through it towards the bottom.

Behind this are two Republican brigades.

It would be nice if more than one of these turned up for the start of the battle.

The three villages and the ridge line across the middle of the board are defended by a bandera of Falange in the foremost village on the right, and three battalions of Regular Army, one in the forward left olive grove, and one in each of the remaining two villages. They are backed by a field gun battery by the windmill, and some Condor Legion tanks at the back of the board. 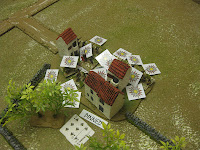 The game started poorly for the Republic. An expected dawn surprise attack was preempted by the Nationalists who saw them moving into position and pinned one of their artillery batteries with a devastating barrage. The Republicans responded by attempting to pin both the Nationalist's forward positions by using the remaining artillery battery and the solitary tank that had made it to the table. The tank failed to register the target, but the Falange in the village got heavily plastered. 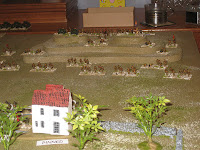 At this point the regular Republican commander arrived and took over from the political appointee who had made such a hash of things. With the Falange pinned he ordered forward the Popular Army, brimming with confidence and keen to get their hands on the Fascists.

The other flank was more problematic as the Regular Army battalion in the olive grove proved difficult to hit and pin down, despite the close attentions of the T-26. Even when it started taking hits it proved very resistant, - even though it was both Untrained and Reluctant! 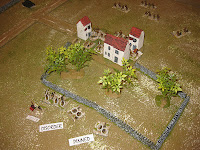 The attack on the Falange proved to be a success, as they were thrown out of the village in Disorder with heavy casualties, to general rejoicing from the Republicans.

The attack on the olive grove was turning into a complete shambles, with the IB's taking heavy casualties and simply being unable to force their way over the stone wall protecting the grove.

However, the situation in the village was sufficiently worrying for the Fascists to get the Condor Legion fired up and into the action. 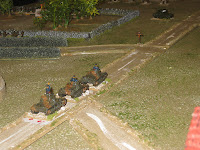 They emerged confidently from their overnight laager, and pushed up the road aggressively. You'll note that they command vehicle is taking up the rear, just in case they get outflanked. 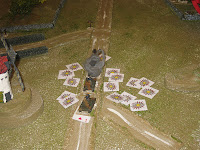 Unfortunately for them they immediately drove into some withering artillery fire. The first salvo they avoided, but second time round the lead vehicle got brewed. 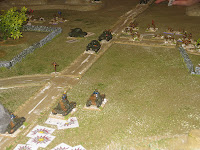 On the face of it this was bad news for the Nationalists, as the remaining Republican T-26s finally made their appearance. Confident of their armour against the Pz1's the leading two vehicles closed the distance rapidly, but their shooting was off the mark. 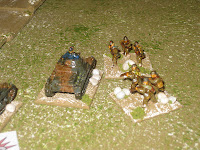 However, elsewhere the attack was grinding to a halt. The Republicans had taken their first line objectives, but the Nationalists were far from beaten. The failure of the tanks to knock out the Pz1's led to some desperate close assaults in order to prevent them getting in amongst the infantry. 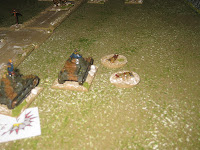 Alas these were heroic, but ultimately futile.

At this point the game was drawn to a close.

In summary a victory for the Republic, but in many ways a typical encounter. Well organised and prepared, the attack was ultimately overblown and ground to a halt under its own weight. The activation system within SNTK is working really well, - it is giving pulses of co-ordinated action, but not necessarily enough to enable a plan to be fully implemented, or implemented smoothly.

I'm still having a few issues with the calibration of the firing mechanisms. The mechanisms themselves are fine, - it's just exactly what numbers constitute a hit and a saving roll are still in need of some work.

Both my players pronounced themselves happy with the evening's entertainment. Ideally we should have played an extra couple of moves but we ran out of time.