With the rain lashing the windows and the temperature dropping close to zero why not add to the British Bank Holiday traditions by having a wargame on Bank holiday Monday. I have, in previous Mays, put on large games in my garage but having had people close to being treated for exposure on a number of occasions I have now abandoned that idea.

After a month or so playing with Spain's domestic troubles it was time to return to the Russian equivalent with a reworking of "Return to the River Don". The Phoenix group in Glasgow took up these rules on Phil's recommendation as they were looking to refight the Bolshevik invasion of Poland. They made a number of changes to speed up the game which looked interesting and in retrospect obvious so I adopted some of those as well as changing the melee rules (which I have always hated as they were lifted almost word for word from a commercial set) by introducing a variant of those in "Send Not To Know".

I had four players, one of whom hadn't played RTTRD before, but had played SNTK a couple of times. In the initial briefing he wondered why I needed two different sets of rules for two wars that were "essentially the same". This is one of my pet hates. Osprey are publishing a set of inter-war rules in their new rules series that claim to cover both, and whilst it is true that the weaponry is similar the conduct of the wars is different. For example in RTTRD recalcitrant units can be coerced into obeying orders, but at some cost. In SNTK the challenge is to make differing units on the same side co-operate with each other. 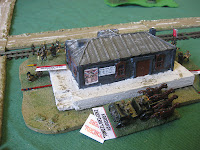 Anyway, on with the game. I had three players so I joined in to make up the numbers for the Reds. The Reds were holding a railway line with a battalion of sailors holding the station. 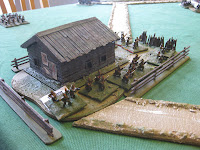 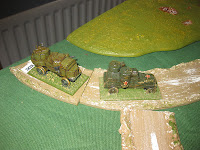 They were supported by a couple of Austin-Putilov armoured cars and a Garford Putilov (yes, the silly looking one with a tank gun).

The Whites had to capture the line. They had an Officer regiment, a  regular battalion and a brigade of cossacks plus a couple of Austin Peerless armoured cars.

The Whites started with push through the woods on the Red right with their Officer Regiments and then a general advance along the line, as I struggled to remember the nuances of the rules system. The Red artillery put some well directed fire into the centre White infantry regiment which caused their conscript battalion to have second thoughts about advancing off their hill. 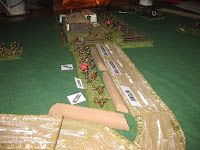 In the meantime the Reds lined their entrenchments and loaded their rifles (aka gave all their units "Reserve fire" orders, except for theo ne that mutinied as you can see near the camera). Both sides' armoured cars in the meantime moved forwards in support. 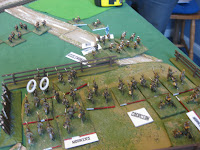 First blood of any significance came with a victorious bayonet charge by an Officer battalion into my stanitsa. Having overlooked giving the defenders any Reserve Fire orders (I should have done it at the end of the previous turn) I was a trifle exposed. The Whites subsequently won the initiative roll and put in a co-ordinated attack with artillery support storming the defences pretty much untouched and routed the defenders. The new melee rules delivered a decisive result, which was my aim, - just not necessarily against one of my own units.

Fortunately for me I had a couple of battalions in reserve, and supported by an armoured car was able to launch an immediate counter charge and recapture it. 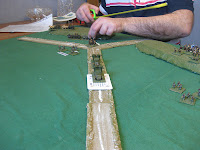 On our left the cossacks had deployed in the open and started to skirmish towards the entrenchments, but they were rather badly roughed up and didn't make a lot of progress, despite support from two armoured cars. The white card under the vehicle indicates it has been subject to a random event, - in this case a double move next turn. 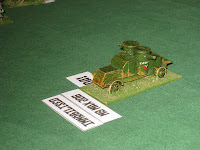 One of these cars also received some rough handling and ended up in a bit of a state, as you can see from the picture. It has been immobilised and lost half of its firepower (BTW this model is from QRF, with added cardboard gun barrel protectors). 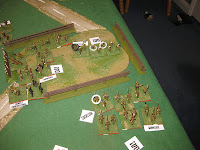 On the right the stanitsa changed hands again, although the Officer battalion was in a fairly bad way after the last fight, and ripe for another devastating counter attack. 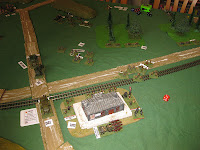 Alas the game drew to a close about then, just I was bolstering the centre with my mighty Garford-Putilov. This marvel of Soviet Engineering had just pulled up to inspire the loyal workers in their struggle against the oppressors.

Much fun was had by all, I think. I certainly enjoyed myself, and it was nice to get out some different toys after a long run of SCW.
Posted by Trebian at 21:27