At last, - two punters turn up and play each other, rather than one of us. They're a father and (grown up) son pairing.

We also see the heaviest Egyptian Victory ever, being a 7-0 win and the entire Hittite frirst wave of chariots destroyed. And the scoring system only goes up to 6, and there's not outcome in the victory table allowing for either side to score Zero.

This game made it 2 - 2 on the day, although one Hittite win should be disregarded as it was obtained by one of the show team playing an old "friend" and proceeding to skewer him with every trick in the book.

I've also had a chance to look at some other games. Here's some pictures of "Crooked Dice"'s "Cult TV" wargame. The figures are completely imaginary and have nothing to do with any TV series you might have seen. 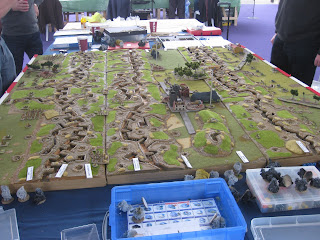