Saturday dawns bright and sunny. Can we really be in England in May? Where is the rain?

As this looks like being the nicest day of the year so far why not spend it in a shopping centre trying to convince the Great British Public that wargaming is a hobby for all ages, including Grown Ups.

Campaign takes place in the Milton Keynes shopping centre in the plaza outside John Lewis'. It is open to the public at no charge, and both wargamers and ordinary members of the public can just wander past. 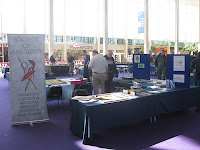 Since they have changed the parking at MK we have to off load at one of the entrances and run back and forth before parking the car. However, we're soon set up and ready to go. We're running Call it Qids today, and also 40mm DBA 3.0, using flats (which look very good and have that strong nostalgic freel t5o them. 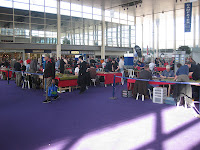 As I said MK is in an open area, so it is open to all at no cost. The competition games are groupede in the middle with trade stands and participation games round the edge.

In order to try to draw the punters in Will and I have a first game of Qids. He takes the Egyptians, I the Hittites. To mix it up a bit we let the Egyptians go first..


In a game of breath taking skill and tactics, mixed in with some terrible runs of luck (how many 1s can you roll in succession) the Hittites triumph in a recreation of the historical outcome.

Updates will be issued later......