Back to the garage

The second evening's play of the latest set of SCW rules took place on Monday evening. Compared to last week's game we'd had a few changes, - firstly I'd written some close assault rules and generally tidied up elsewhere. Secondly we had major changes to the cast list, with two players dropping out and a new one coming in.

The game picked back up with the Legion forcing their way into the olive grove on the republican left wing. The Nationalists shot them in with a devastating barrage from the massed divisional artillery, the effect compounded as the International Brigade on the receiving end was still moving into position and so was more exposed. 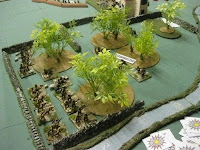 The first major use of the firing outcome rules saw the IB break and flee as the Legion pressed on with their bayonet charge. This was supported by an assault on the other IB unit by a combined Legion and Moroccan attack which threw their opponents back in disorder, stumbling towards the baseline but not broken. 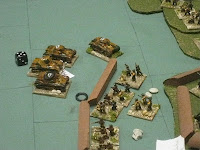 On their other flank the Nationalists tried to develop the advance but one of their battalions was badly mauled by the republican infantry fire and dived into an olive grove to recover. The republican artillery was meanwhile concentrating on the on-rushing Panzers, but to limited effect. Abandoned by their infantry who were skulking in the olive groves they drove into the trenchline, machine gunning as they went.

Now the close assault rules weren't really written with such an event in mind, but applying them turned out to work quite well. The republican militia were broken and departed from the table, the tanks taking only limited damage. The republican artillery was proving to be singularly ineffective in the anti-tank roll, so the Asalto unit holding the village on the ridge line took matters into their own hands and counter-attacked with grenades, inflicting heavy damage on the tanks (which all looked very good, but the rules need some work here.) 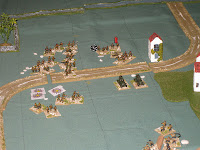 Meanwhile it was all finally going off behind them, as the republic's armoured cars roared up to bolster the position, just as the nationalist infantry decided to put in an appearance. 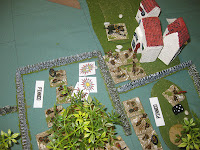 Back in the olive grove on the other side the Legion were working their way forward only to run into some stiffer opposition in the shape of an IB battalion concealed in the village. 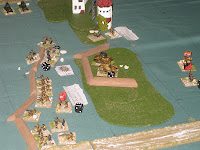 Nothing daunted in the middle, however, the remaining Panzers pushed on, overrunning the main artillery artillery position. If only they'd had some infantry to consolidate behind them. Notwithstanding that they had made the breakthrough and the republican line was in disarray.

At which point we called it a day, and closed the battle down.