I've written before about Neil Thomas' "Ancient and Medieval Wargaming" which I reckon to be a good, fun introduction to wargaming. The rules play quickly and have provided me with a lot of enjoyment.

The army lists in them are okay, although sometimes very generic and often slightly eccentric. The challenge of doing every army in 8 units also means compromises have to be made.

So, today I had to take a day off work to have some more lithotripsy. Luckily I had a morning appointment, so I felt that if I recovered quickly enough it'd be fun to have a game in the afternoon, and give my Belisarians another run out, this time using AMW. Phil was up for it, so we agreed that if I was sufficiently with it we'd have a go.

The lists for the two armies, Belisarius and Totila in Italy, are a bit difficult to derive from the lists as in the book, so I did a quick bit of work and adjusted the Armati lists we both usually use. This gives us army lists that look like this:

I allowed the "kataphracts can shoot and move" to all kats, hippo-toxotoi and Roman cavalry , but dispensed with the shield wall rule. We also playtested some of Phil's house rules on evading and double "block" units.

This is how it looked:

Phil won the initiative roll and started towards me. He tried to draw me out wide and push through the middle with a block of mixed Roman and Gothic cavalry.

Phil outnumbered me in heavy cavalry, so I had a problem. However as all units in AMW count equally towards victory, I avoided this thrust and pushed out after his light cavalry on my left flank with my Kataphractoi. 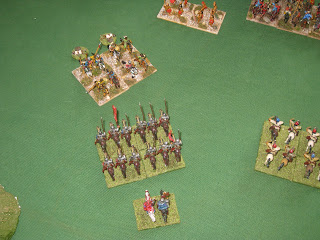 As you can see the Kataphractoi did some pretty good shooting, allowing me to use two of my new casualty markers on Phil's light cavalry. I was a bit worried at this point as all I had plugging the middle was my Huns, as you can see. I had to play cat and mouse with that big block of heavies, and Phil's javelins were poised to get in on the side of my Kats if they ever got to grip with the Light Horse.Phil's heavy cavalry did get a bit close, as you can see below. 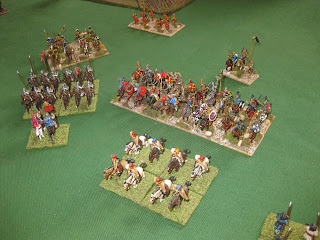 However, my Huns managed to get away with it, whilst my heavies went off on a wild goose chase after that light cavalry, as you can see in the top left, below. 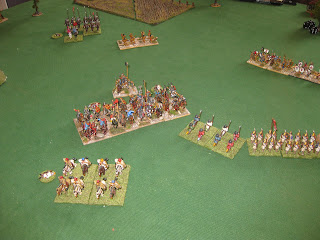 What I'm trying to do in the picture above is draw the cavalry further in and protect the Limitani's left flank with the javelins whilst I have it out with Phil's heavy infantry. In the end this worked out quite well, as Phil split the unit to pursue both the javelins and the Huns. Meanwhile on the right, this was happening:

Fortunately for this combat I'd managed to stick a few arrows in the Gothic forces, which (together with demon dice rolling) would tip the action in my favour. This was part of a general engagement about to happen all along the line:


The combat on the right went bloody very quickly when I got my psiloi archers in on the flank of Phil's Goths. The bases are turned sideways to indicate a morale test is required. 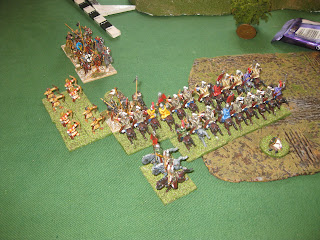 After this point the action got a bit hectic and I forgot to take any pictures. After a few more moves it ended up looking like this: 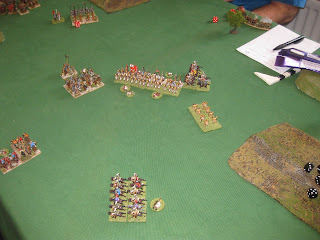 What has happened is this:

1) Top left - My Kats have given up on the light cavalry and turned on Phil's psiloi
2) Centre left middle- Phil has just destroyed/routed the last of my Psiloi javelin men
3) Centre - the two infantry lines are hard at it. One of my Hippo-Toxotoi units from the right has broken through and caught Phil's Franks in the flank.
4) Bottom left/bottom centre - My Huns have evaded off picture leaving Phil's last Roman cavalry unit to face my other Hippo Toxoti who have about faced from destroying their Gothic opponents. 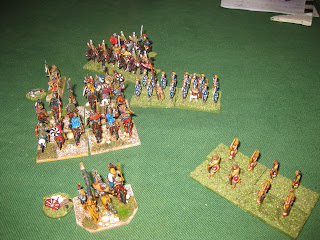 Phil has turned that middle cavalry unit in on the infantry melee in the middle, and I've turned round and moved across having broken his Frankish warband. Lots of bodies in this area of the table.

However, the game is decided on the left, where my Kats finally see off the light infantry, destroying Phil's sixth unit and giving me the game.

So a clear victory to me and the first one for this army.

The army lists worked out okay, and the evade rules improved the game but still need some work.

Nice way to spend the afternoon.