Can you tell that it's finished yet?

I have finally finished the Belisarian Italian Army. Here's the proof: 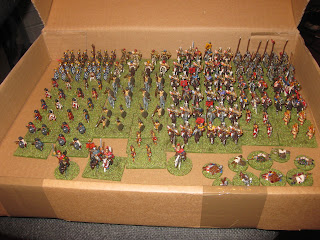 It's resplendent in a box I nicked from work, rather than the standard Trebian storage system as I think it may be a bit big for that.

I first started talking about this army in September last year, so it has taken about 9 months to get it done, which isn't too bad, although it'd have been finished much earlier if I hadn't been made redundant. The projects I was going to do before the order arrived that I wrote about at the same time still haven't been completed, so they're back on the bench to be done.

I'm quite pleased with the look of it, but that's the last time for an army painted in this style. Takes too long and is too fiddly. On reflection it is also too large, - I'll never use all of those horse archers as far as I can see if I ever want to win a game.