Bank Holiday Monday saw another of my almost traditional wargaming days. The initial plan was to play a large scale SCW semi-operational game with mostly untested rules (who says I don't live life on the edge?) but then Tim Gow offered his take on H G Well's Little Wars in the back garden. This plan evaporated as the rain on Sunday fell and fell rendering the lawn, long, wet and uncuttable. However Tim saved us by offering to run Command & Colors Ancients as a figure game.

C&C has been round a few years and has a widespread and enthusiastic audience. It is a game the MNG has not engaged with yet (except for Phil who has played every set of Ancients rules ever written) so the offer went down well.

Tim does the game using Hexon with recycled 25mm figures from the 1970s, mostly. I think I have written elsewhere of my lack of love for hex-based figure games as aesthetically the hexes look artificial. I can take them in board games but in figure games where you are trying to make stuff look real to impose a shape that is unknown in nature (except for the Giant's Causeway) they jar.

Having said that Tim's stuff looked pretty good on the table and when Chris & Phil turned up we were ready to refight Carrhae. 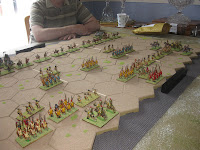 Here's an opening picture of the game set up. The Romans, commanded by Phil & me are near the camera. The set up is given in the scenario booklet. The game's unique points are a card driven order system and some specially marked d 6's. 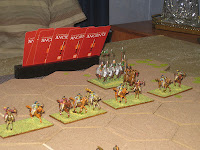 Here you can see the Parthian control rack with their cards neatly arrayed. In this scenario they get six and the Romans four. This gives the Parthians more options. This added to the fact they go first should give them an advantage. 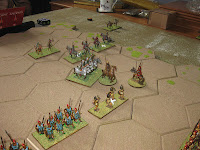 The game started on the Roman right with some close action. The Parthian shooting was ineffective and the Romans closed the gap to engage in close combat. A couple of effectively placed hits forced some of the Parthians to retreat off the board, never to return. 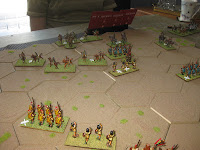 We then developed our centre, pushing the Parthians back. Their initial mistake was revealed to be close to fatal. You have to get away from the table edge in order to avoid effectively being destroyed by retreat orders (which does seem a bit odd for Parthians in the desert). 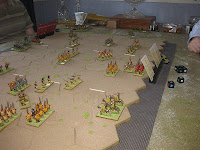 A wider shot shows the Romans benefiting from aggressive handling of their forces, whilst the Parthians mill around in their effete, trouser wearing fashion.Defeat can only be a step away. 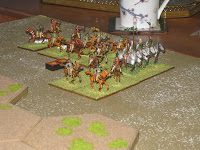 The game is clearly nearing its end as the Parthian graveyard increases in size. In order to win you have to kill 7 of your opponent's units (this may vary by scenario, - I don't know). We're clearly well on the way at this point. 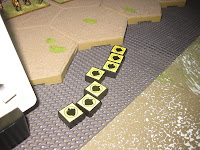 At last we collect the seventh point (or banner) and the Parthians are done for and defeated. The Romans suffered a loss of a mere two units, and so go on to sack the Parthian Empire before heading home for a Triumph.


Following this we swapped round and played it again. This time the Parthians did better, only losing by 7-3. This was an inexplicable defeat as I was commanding the Parthians, and played a near perfect game (!) based on the cards we had. The dice let us down badly, plus in the first move we suffered massive casualties from a hail of Roman missiles.

So, two crushing Roman victories to go with the overwhelming Parthian victory when Tim ran it in Sheffield earlier in the week.

Well, it was a lot of fun. The mechanisms are are clever and simple and easy to follow. The game plays quickly with little if any problem. We were all grateful to Tim for bringing it along and I was up for trying other scenarios although Tim hadn't brought along the other booklets so that idea came to naught.

At which point I lit the barbecue and we retired to the garden where the summer had finally decided to turn up for a few hours.

So what do I think of C&C? I have little to add to what I said above. I'd happily play it again should the opportunity arise.We (that is the MNG members) discussed it briefly and agreed we'd all play it again, given the chance. However none of us was keen to dig our hands in our pockets for the £40+ needed for the basic set and the £25 for each expansion set. With only c10 scenarios in a box it's a bit steep (especially compared to Lost Battles) even more so when you want to play it with figures so won't use most of the box contents.

The comparison to LB is a good one, I think. LB is a good simulation that tells you a lot about the period. C&C is a good game that probably doesn't. C&C is also probably a lot more fun.

Now, I'd best go off and finish those SCW rules.
Posted by Trebian at 07:45