Summer is here at last

Well, it must be summer, mustn't it? We're a third of the way into June and I've set up the table in the garage and we started a game last night.

Admittedly we only stuck it for 90 minutes before we retreated inside for a hot drink, but the summer's wargaming ice has been broken, even if we had to play in fleeces and jumpers.

The occasion was the first play test of the Divisional level+ Spanish Civil War game which now rejoices in the name of "No Man is a Peninsula". I suspect that may change.

The working skeleton for the game is "Red Army, White Guards", which you can download from the blog. Much of that system has gone, - apart from the figure and ground scale. The figure scale is four bases to a battalion, and a 6" square to 500 yards. 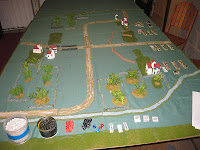 Again we're on the road to Madrid, but this time with a couple of brigades of Regular Army, a Tercio of Legion, some Falange and some Pz1s. The Republic was being defended by an International Brigade and a mixed brigade of Anarchists, Communists and regulars.

The Republicans filed into their trenches and secured their flanks with the IBs and some Asaltos. The Nationalists put the SFL on their right and set up for a general push in the middle supported by tanks and artillery. The Falange were given the job of holding the left flank.

The game started slowly as the Nationalists got to grips with the activation sequence. It matters what order the units are moved in as some are better at following on form other units, rather than the other way round. No one likes taking orders after the Falange, for example. 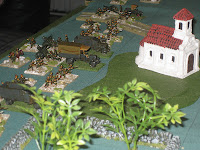 The push developed well, with the howitzer batteries deploying behind a hill and the observer climbing the church tower for a better view. The tanks pushed steadily forwards in the middle, although the Republican 75's observed them from their dug in position and managed to knock one out. The tanks responded with a brave counter attack, driving within MG range and trying to shoot them up. Elsewhere the howitzers got the range of the trench line and started to plaster it, although to only limited effect.

On the right the Moroccans and the IBs were facing up to one another across the boundary of the olive grove when the second full turn finished and I decided to call it a night.

So far it is looking quite good. The activation sequence is going quite well and providing a few hiccoughs without completely derailing the game. The firing system is also shaping up well I think. Depending on range each weapon type inflicts a given number of hit points. These are marked with blast markers. When it is the unit's turn to activate you roll on an effects table based on number of hits and the active state/cover of the unit. This tells you whether it has lost any cohesion or taken any hits. Unlike RAWG therefore you only roll once to determine the outcome of firing.

The anti-armour rules are taken from SNTK and probably aren't really suitable, but they're doing a job for now. The close assault/overrun rules come from RAWG and weren't tested in the game. They may be re-written by next Monday.

So, a promising start to the game if not to the summer.