And so to Sunday morning, and my SCW game. I was up early to get the tables sorted. I was more nervous before this session that I have been for a few years as the rules have only had a few playtests due to their late genesis. Usually I have a good six months of development behind me and I know what works really well and where I need help. In this case it looked like it could be everywhere.

I'd been given the Panelled Room, which is one of the best venues at Knuston. I needed 4 players, expected 6 and ended up with 5. A lot of people took the early morning hangover option of attending the lecture on Phillipi, - the sort of thing I've done in the past as it eases you into the day gently.

My brave lads turned up mostly on time (thanks to Will, Chris, Alex, Stephen, and particularly Fred for the time and effort they put in). The scenario was a combined push by both sides to seize a key road junction in a village and a bridge across the small river. I'll let the pictures tell the story. 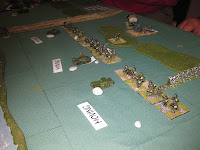 The Italians on the Fascist left drive forward, led by their armoured units. Will was showing all of his experience here, and at this point had not suffered heavy casualties. 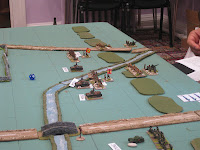 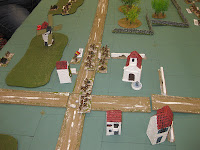 The communists under Chris, with much prompting from Fred, move into the village. In the far distance Stephen's Anarchists start to edge out to the flank. 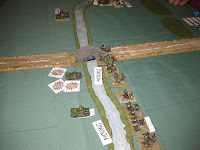 The Italians seize the bridge and liberate it from Red control. A message is immediately sent to Mussolini and the victory is announced in Rome. The Reds start to shell the bridge. 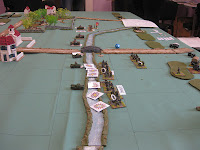 A longer shot of the table. The artillery fire on the Italians has become more widespread and effectively pins them on  river line in front of Fred's International Brigade. 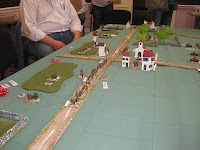 Stephen's Anarchists in the top of the picture advance closer to the village. Fred's IBs confidently push forwards to take on the Italian Fascist Hordes. 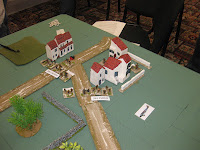 The Anarchists liberate the village, but the Fascists won't give up and send in their first wave of bombers which on this occasion drop slightly short. 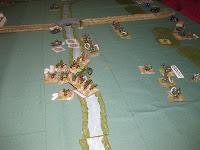 The IBs launch a ferocious attack on the Italian Fascists who take the opportunity to attend to an urgent appointment elsewhere. Fred looked happy, Will looked unsurprised. 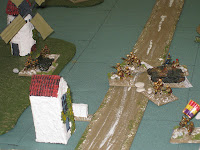 Regulares, accompanied by Panzer 1s launch their assault on the village. The Communists find the heat a bit too much for them and are forced to convene a workers' soviet somewhere off the edge of the board. 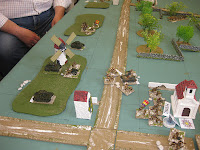 A wider view of the central struggle. You can see the scale of the problem facing the lone Panzer squadron in the middle of the table  as the T-26s emerge from behind the ridge line. The windmill has been hit with an airstrike.


In the struggle between Fascist and Soviet engineering who will triumph? 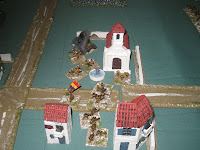 The Panzers veered off and decided to clear the town instead, accompanied by the Regulares. This was a success except that some of the dinamiteroes managed to sort out one the Panzers.

And that's about where it ended, with the Fascists holding all the objectives, but the Reds.....well the Reds had a challenge to drag it back but with the armour, who could say?

What I haven't been able to show you is the events in the far village, which the Anarchists occupied, booby trapped, set on fire and then crucified the local priest. It was a whole game I hadn't designed, but Stephen seemed to be enjoying himself.

Which brought us to lunch, amid the arrival of numerous other delegates who turned up to photograph the eye-candy.