After lunch there's only really time for one more game before the AGM & off home time. This year I got myself a role in John Bassett's "Coldfeet", an RPG type re-enactment of a (very) Cold War incident.

In the early 1960s the USA reckoned that the Soviets were using arctic drift stations to monitor and spy on their nuclear submarines under the polar ice cape. Fortuitously for them the Soviets had to abandon one at short notice due to cracks appearing in the ice runway. Although at extreme range a band of intrepid specialists are tasked with planning and executing a deniable operation to find out what's been going on up there.

The American's secret weapon is the Fulton Skyhook (see Fulton Skyhook for further details). This was featured in the Bomd movie "Thunderball" and enables people and equipment to be picked up by a moving plane. Thus the team can be parachuted in, then "skyhooked" out, so you don't need a runway.

The game is in two phases, - the planning of who is going and with what equipment and then the operation itself.

Half of the players can be parachuted in, and half are responsible for the flying and the extraction. We flew in 3 on the first wave, and because they were making such a cock of it I flew in on the second wave as team leader to get the mission finished and hide the evidence we were there. 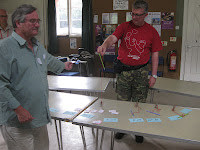 The game's mechanisms are cardboard simulator. Parachutists are physically dropped onto the tables, & woe betide them if they fall into the crevasse in the middle. Whilst the huts are searched the other players build a Blue Peter Skyhook simulator and then when the time comes, extract the players. We built a rather spiffy device using wool, pencils, blu-tack and crucially a pair of scissors sellotaped to a piece of cardboard.

All the team were finally extracted safely, with me lifted of last, eventually, after several failed passes by the pick up plane.

All in all a fun way of exploring one of the Cold War's almost genuine James Bond type events.

An excellent way to round off the weekend.