So, here we are, with the opening account of the recent SvP action fought by elements old and new of the Monday Night boys. 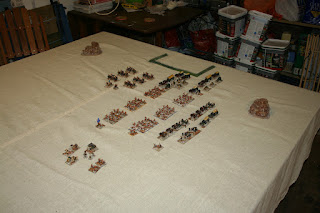 Here we have a view of the British forces assembled on the plains before their zariba, which is marked on the edge of the table with some barbed wire elements. To either side are some rocky outcrops, useful, perhaps as heliogrpah stations? 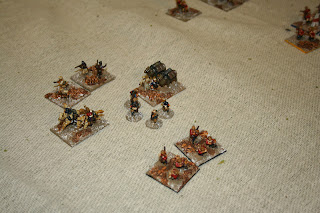 Maj-Gen Erskine-May, and his support units. In picture you can see the heloigraph teams, the Engineers with their supply camel and Mr Carlton Edwars and his "friends". 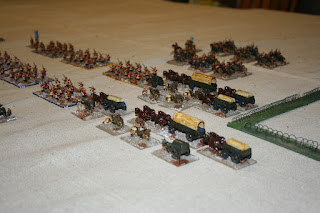 A clearer shot of the infantry baggage. Nearest the camera is the mule drawn water bowser. Apart from the wagons all the figures are Peter Pig. The wagons and limbers are mostly Minifigs, the draft animals are a variety from wherever I could find them. 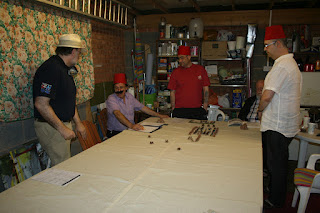 The Imperial forces debate their plan. From Left to right, Harry Masterley, Sir Archibald Erskine-May, Percy McGringle, Barty Knowles (seated) and Findlay Harrison. An unfortunate rash of fezzes has broken out. No doubt the medical officer can be of some help. At this point the players are trying to resolve three issues. Firstly, who should remain as a garrison, secondly what formation should they adopt and thirdly when should they leave.

They eventually leave a battalion behind, with a section of engineers, a gardner gun and one of the two heliograph teams. In all the excitement one company of the regiment left behind isn't fallen out and ends up being part of the column.

They end up advancing in a sort of open box, with baggage in the middle. As the desert is open they reckon that can get from column to line and hence square pretty quickly. There's a degree of tension over when to leave. The foot sloggers want to leave in the dark when it is cool. The cavalry want to leave after dawn as it is easier to feed the horses in daylight and also much easier to saddle up in the light. In the end they compromise. The infantry will march out before dawn. The cavalry will follow later and through benefit of their greater mobility will catch up with the column at about 8:30am.

In the absence of any cavalry the Major-General prevailed upon Mr Edwards to send forward his native scouts to provide a recce screen for the column. Despite the Intelligence Officer's surprise and muted objections the M-G insisted and away they went, never to be seen again. Who can say what became of them.

A column with no scouting or recce resources. was too fine a proposition for the Mahdists who launched  their first attack when the British were about an hour from their zariba. Emerging from a fold in the ground they rushed across the sand. Meanwhile the Highlanders coolly formed into a line and gave them a severe volley from their Martini-Henrys. The stopping power of this weapon is now legendary, on account of the heavy bullet it fired. In this instance it did not disappoint. The Mahdists were stopped in their tracks and turned into a liberal sprinkling of casulaty markers. Alas it was all over so quickly I didn't have enough time to photogrpah it, merely the aftermath. 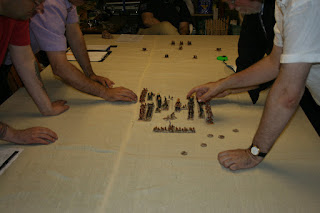 Whilst this was only a minor skirmish the infantry weren't backwards in drawing the attention of their mighty deeds to the cavalry when they finally arrived. There was clearly going to be a need for heroic deeds later in the day to ensure honour was restored.

The column moved off, this time screened by a force from the Yeomanry. After an hour or two's march They espied some smoke in the distance, slightly off the line of march. The Colonel called his unit back together and sent them off to investigate.

The Yeomanry discovered a small village with the buildings already put to the flame. Dervishes were swarming all over the villagers, and on seeing the advancing horse gathered together to meet them. After siziing up the enemy the Yeomanry returned to the column (aka failed a Panic roll) with the news that there were "Fasands of 'em". The lancers therefore took up the challenge and headed off to deal with the menace. 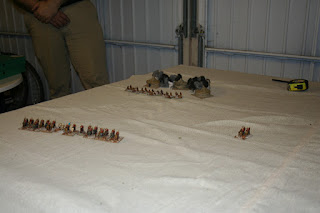 Deploying into line the gallant horsemen thundered across the desert, accompanied by the Intelligence Officer. The Dervishes readied themselves and......resolutely refused to do anything other than just stand there. It was most annoying. Soon the Lancers were amongst them, pennons dipped in blood. 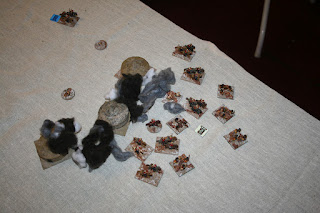 It was a magnificent charge, completely devoid of any unfortunate surprises and resulted in lots of dead and fleeing fuzzy-wuzzies. The Lancers were triumphant, firmly convinced that honours were now even with the infantry (despite the Intelligence Officer expressing the opinion that contrary to other accounts there weren't "fasands of 'em". Don't know what got into him and why he might want to provoke the cavalry into an indiscretion).

At which point I will close this entry, and leave some more adventures and photographs for a future entry.