Hopefully I've written before of my love of Irregular Miniature's "Really Useful Guns" range. They're a range of large-ish 15mm guns covering the late 19th century through to the end of WW2, so they sit perfectly with the modern 15mm figure. By putting different parts together from a standard set of bits you can get a vast selection of pieces all at really, really reasonable prices.

As I'm a fan of lots of guns in the modern era this suits me down to the ground.

My latest acqusition is one of the range's few "one offs". It's the Russian 76.2mm AA gun Mod 31. You know, the Soviet one that looks a lot like an 88mm without a gun shield. It's a little bit crude but I think it is a cracking little model to go with my SCW forces. 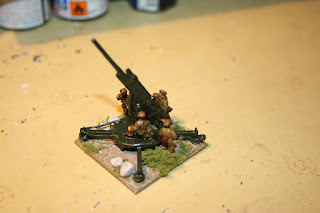 I liked it so much I went as far as to carve the bases off some gun crew so they can stand on the crew platform. How super-detailing is that?

Alas they don't do an 88mm, so I'm going to have to go and see Mr Skytrex and pay top dollar for them. Ho hum.

Anyway, here's another picture for you. Taken from the other side. 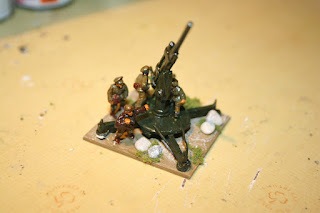 On a final note I've got a couple of pictures of this gun from a catalogue of captured Republican weapons. The kit comes with a pair of wheels, which I can see from, the display photo attach under the platform when the gun is being towed. But I can't work out what happens when the gun fires. The photo I have implies they are put on the top of the crew platform, but if they were the crew would trip over them. So I've guessed they are removed and put to one side. Alas I have few sources on WW2 Russian artillery to verify this, so if anyone knows, drop me a line.