With a bit of pike and a bit of shot

After the first run out two or three weeks ago we returned this Monday to Neil Thomas' Pike and Shot rules. This time round it was the turn of my Elizabethan English and their Spanish contemporaries to be retrieved from their boxes for a rare run out.

These armies are a mixture, mostly, of Essex & Irregular with some Dixon and a few others thrown in. As we were playing a post-Armada landing game I had to re-write Neil's English army list to exclude the Irish units.

The Spaniards had a couple of Tercios (double sized units), some lancers, hargaultiers and reiters. The English had two units of demilancers, some border horse and four regiments of trained bands. Both sides had a solitary artillery piece. Three players turned up so I joined in on the English side rather than umpire (and in that statement is revealed one of the problems in the game, but more of that later). Note as we were using 25mm figures we used inches instead of centimetres as measurements. 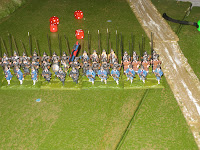 Now the Tercio is a fearsome thing, and the Spaniards had two of them. They started the game by marching across the table aggressively, like they owned the place. 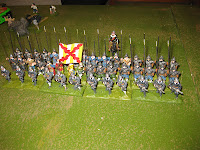 Under the rules as indicated above they each count as two of the eight units you're allowed. They're elite and whilst not packing much firepower compared with other units their sheer size makes them really hard to break down. Especially as they are elite as well.

Did I mention they're elite? 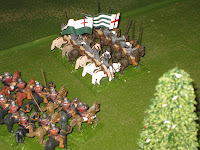 We responded boldly to this central thrust by sending most of our cavalry down the left flank to sort out the scruffy Spanish reiters before turning and falling upon their centre from behind. In theory. 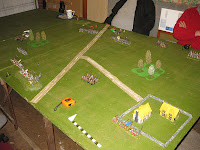 You can probably get a better idea of how it was all shaping up from this wide shot. The other cunning plan was to push on with the other demilancers whilst occupying the walled enclosure with the infantry. In the middle our other foot lined themselves up to create a killing ground for the on-rushing Tercios. 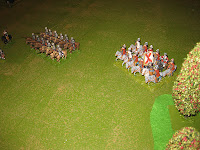 On the Spanish left they had a unit of Lancers supported by the hargaultiers. My plan was to enfilade them with the shot and then countercharge with the demilances. It was at that point my desire to be an even handed umpire whilst also playing got the better of me, and I allowed the hargaultiers to manoeuvre like a cloud of huns and they danced round everything to take my demilancers in the side. 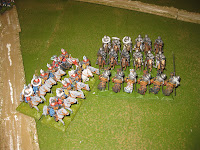 A bit like this. This is actually worse than it looks as my demilancers are a four base unit and we're only a move or two into the combat.

I sent forth my infantry to save the situation, but it was all over before they got there. 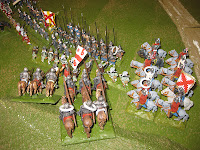 Having destroyed my demilancers the Spanish horse turned upon our infantry line which was hotly pressed by the Tercios.  This likewise did not end well.

And then the game finished.


Well, I don't like it as much as the Ancients version. I suspect it hasn't had as much development, - after all the rules are in the "Introduction" book, - it doesn't have its own standalone version yet. It is a game system that makes the players subject to outrageous turns of fortune and it still feels really "ancient" in tone. The solution for mixed weapon units is clever in its way but doesn't ring true. Cavalry combat goes on too long, as well (although  that can be fixed with a tweak to the number of dice rolled).

We could probably fix it all. Phil remarked that there were a number of decisions in the rule design where Neil Thomas has done exactly the opposite of what he would have done and whilst I wouldn't go that far there are some perversities.

The game is also heavily beholden to the troop classifications in the army lists, and some of the issues you get from this you have to put up with. Spanish Tercios should be elite, and they should be bigger than everyone else (probably). However this does give a really difficult problem to solve for any attacker unless he's got a lot of artillery and probably some Swiss. Or he's really lucky with his musketry.

I have one last scenario to play through before I consign the rules to the "done that" pile. That's with my early Tudor Henry VIII and their Francis I French opponents, which I'll hopefully get done in the next few weeks.

We ended the evening with a wide  ranging discussion on the nature of the Battle of Bosworth (Phil has new book and has spoken to some people) whilst I mused on the demise or otherwise of the English heavy cavalry mount during the medieval period and we discussed the nature of kingship in the pre-modern era.