After clearing the village the column pushed on across the desert.The encounter at the village had made the players more wary of what the apparently open terrain may be holding for them. The Highlanders at the head of the column were deployed into line to enable the column to close up into a square in short order should it be required. By mid to late afternoon they could clearly see the fooothills of the Waratab Mountains in the distance. 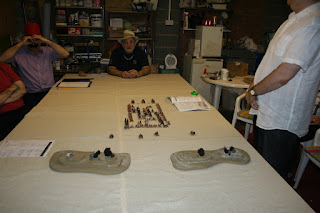 In fact as they closed to distance it became clear that they were marching towards a ridge line covered in thick scrub, where the only safe path through for formed troops was a defile about the width of an infantry regiment in line. The column halted and deployed the RA's 9pdrs and proceeded to reconnoitre the scrub by fire. This was followed up by an aggressive push through the scrub by the cavalry. This was a tense moment, - the visibility in the scrub was severely limited as mostly the horsemen could not see above it.They scouting discovered some blasted trees and the odd mangled Mahdist scattered through the brush.The squadron exploring the defile emerged the other side to discover a deep wadi and evidence of dervishes, - quite possibly "Fasands of 'em". The cavalry, slightly spooked, fell back on the column. 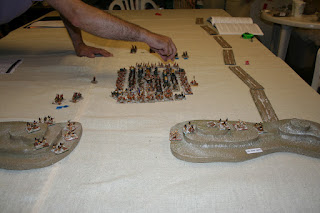 The column reorganised itself slightly band pressed on, as a wadi started to appear out of the desert. As they closed with the ridge line desultory firing broke out from the scrub. It was now quite clear that the column could not get through the defile in the way it was currently deployed. This occasioned a reorganisation, forcing the artillery to be pulled back within the square. It was also quite clear that there was a lot of baggage to get within the square, and it would be a tight fit. Some of the cavalry were forced to dismount to help out, - although the helpful offer to form the back line of the square entirely with mounted cavalry was declined by the Major-General who was more concerned to ensure he had reserve bayonet groups at each corner of the square.

It's always nice when one of the players reads the briefing material from cover to cover and can actually remember some of it. I was also impressed that close attention was mostly paid to where the spare ammunition was, and sides of the square were allocated to the various commanders. Alas for  "Daddy" Knowles he got the side near the wadi. 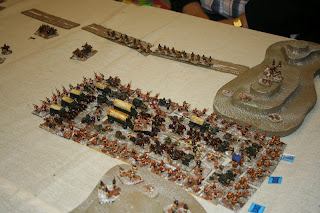 As the column pushed into the defile the fire from the ridge line got heavier, and the column halted to give them a volley or two. At this point Mahdists started to emerge from the wadi. Seeing some fresh targets, the Cavalry shook out into battle line and then sort of hesitated. 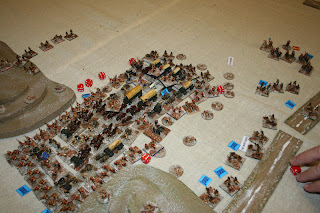 Hordes of fuzzies sped across the desert, sun glinting on their leaf-bladed spears. Clearly massed firepower would be essential to see them off, so "Daddy" Knowles swung the rear face of the square open towards them, and ordered rapid fire. 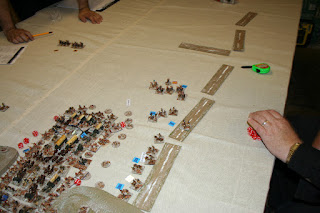 The massed fire from the brave Imperial infantry caused massive execution amongst the fuzzy-wuzzies, and their charged seemed to falter. However all that was happening is that their thrust was being adjusted. Several hundred peeled off to face down the cavalry, whilst more swarmed up the line at the back of the square to find their way round the end and into the open square. Down the side facing the wadi the fire had been mostly effective, but some stuttering, ill directed fire half way down the square enabled the fuzzies to close with the square. 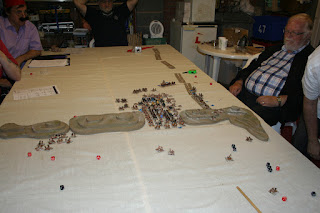 I've lost track of what was happening in these photos, but it looked a bit dicey for a while. Down the side of the square the Mahdists had got in amongst the baggage,.ignoring the sword waving of "Daddy" Knowles who had emptied his revolver into them to very little effect.and had wrecked one of the water bowsers. An impromptu bayonet group lead by "Daddy" Knowles and consisting mostly of the heliograph team and some engineers counterattacked successfully.

The head of the column was now under a fairly hot fire, and the Highlanders impressed everyone with their calm and methodical firing. 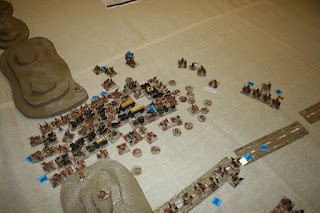 At the rear of the column it looked like it had all turned into a bloody mess with half of the regiment that had opened the square dead and dying. The dismounted cavalry on the far side counter charged and the Gardner gun was turned inwards to provide support. The Lancers closed up to provide support as well. the tide had clearly turned against the fuzzies who were now scattered liberally across the blood red sand.

At this point the attack had been beaten off, and Osman Digma's forces given a seriously bloody nose. News of the fight was heliographed back to the zariba, and a council of war was held. Carlton Edwards was of the view that the column had broken Digma's main force, and this was a major victory....but at what cost.

The force had taken heavy casualties amongst "Daddy" Knowles' command. There was no probably not enough time to get to the target village in time to build a zariba, half of the water had been lost and the rest of the baggage had taken a sever hit as well. The cavalry was blown, having fought two major actions in the day.

It was resolved to pull back from the battle site and build a zariba here. Engineers were despatched with the Norton Tubes to look for water in the wadi, whilst the wounded were tended to and the dead buried.

All round a satisfying evening's game. I need to work on my understanding of the rules and work out a new scenario for the next game. The players put on a good performance and have made this corner of Africa a place where an Englishman (and a Scot) can hold his head up high.