The death of cavalry as an effective arm in popular perception is widely linked to the rise of the machine gun, with harrowing stories of cavalry charges being massacred on the Western Front. In fact the evidence for such events is very thin, if not non-existent.


Cavalry as we know persisted into the Second World War effectively in the role of mounted infantry, the important fact being that a man on a horse is much more mobile than a man on foot, and that in a semi-industrial society a reliable horse is cheaper and easier to obtain than a reliable truck.


Plus a horse is much better off road, so its use persists in parts of Africa in particular. Who amongst us who plays AK47 hasn’t bought Mr Pig’s very fine looking modern professional cavalry?


Any how the corollary of using cavalry as mounted infantry in the industrial age is that they have to have all of the kit that goes with being an infantry unit. In respect of the Spanish Civil War (where Moscardo’s cavalry were very active and recorded only one actual charge) sabre squadrons carried LMGs, and cavalry regiments had MG companies.


I raised the question before a couple of blogs ago as to what an MG company might actually look like. Every wargamer knows that in the Russian Civil War the problem was solved by mounting the MG on a cart or carriage to create the tchanka, much beloved of Nestor Makhno and the anarchists. These are a fun model to own and use in a game, and my Russians have quite a lot of them, again courtesy of Mr Pig. 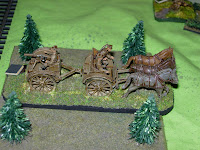 If you read the comments on this blog you’ll know that Tim of “Megablitz and More” has shared with me a photo of his Polish MG cart, which as far as I can see are purpose built, compared with what seems to be a persistent ad-hoc approach to their provision adopted by the various forces in Russia. For those of you who like everything in one place, I repeat the picture here.
In respect of Spanish Cavalry I’m prepared to accept a view that says in an army where the pre-war height of military technology was the Renault FT-17 that the idea of mounting an MG on a cart might be a bit revolutionary, so in the absence of any actual pictures for Spanish Mounted MGs units I’m looking for inspiration elsewhere.


I’ve found a few photographs on the internet that might be informative.

The first comes courtesy of a Romanian WW2 cavalry re-enactor (who’d have thought there would not only have been one of them but also one who specialises in MG pack animals). Alas I'm not an expert in Romanian uniforms so it could be that this has been broken down to use in difficult terrain and it's a mountain company horse.


As you can see gun and tripod are securely attached, and lead in this instance by hand. 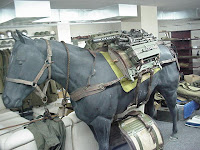 However, here's a picture of a US cavalry packhorse using the  M1924 Phillips Cavalry Pack Saddle, complete with machine gun hanger, M1919A4, M2 tripod, and spare parts chest (according to the forum I ripped it off from). 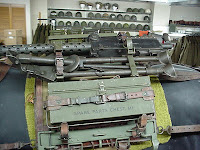 And here's a close up of the pack assembly itself. I'm becoming convinced that this is what I need to build, only with a Hotchkiss on it, rather than a Browning.

When I was looking for pictures last night I found a WW1 period photo of a US pack horse with a Vickers gun slung on the back of it. Of course now I come to put it in a blog I can't find the picture, and I'm posting from another PC so the browsing history is no good either.

Putting it all together I reckon I know what I'm going to do now, so I need to find some spare horses and start to play with some wire and tubing and Miliput.

I wonder what Mr Steele is up to these days?